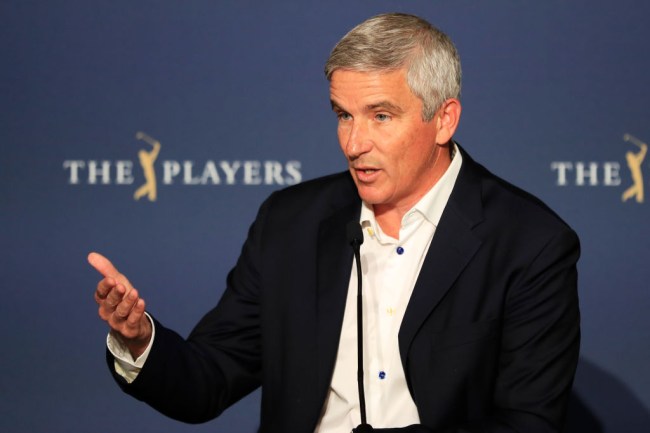 On top of releasing the letter, Monahan sat down with Harold Varner III for an open, honest conversation which the Tour posted on Twitter and Periscope on Friday morning. I suggest watching the video.

Monahan’s letter, titled ‘A time to communicate and search for answers,’ was sent to PGA Tour staff prior to it being published on the Tour’s official website on Friday.

As the letter begins with Monahan explaining that he and many others spent the past weekend trying to understand and process the civil unrest around the United States following Floyd’s death. He then goes onto write, and try to answer, the question of ‘what can I say and what should I do?’

I’ve often heard that if you’re not part of the solution, you’re part of the problem. What can I say? What should I do?

I’m certain many of you are asking those same questions.

In the midst of that confusion, as usually happens, the PGA TOUR family steps up to shine a light of perspective and compassion.  First, I had several meaningful and emotional conversations this weekend with colleagues and friends in the African-American community, who – once again – showed me that sometimes listening and making a commitment to understand are the only things you can offer, and that’s OK. And I learned that two of our PGA TOUR YOU groups – CORE and HONOR — took it upon themselves to work over the weekend on a unified message … reminding all of us at the TOUR of our shared values, offering help for those who may need it and providing perspective on how to be there for each other as we navigate this incredibly complex and painful issue, together.

What I was left with was this: make no mistake about it – someone you know and care about is hurting right now, even if they haven’t told you that directly (and, of course, our work-from-home, socially distant way of living right now is not helping the cause). And if anyone at the TOUR is hurting, we should all hurt. That’s how a family works.

You can read the letter in its entirety here.