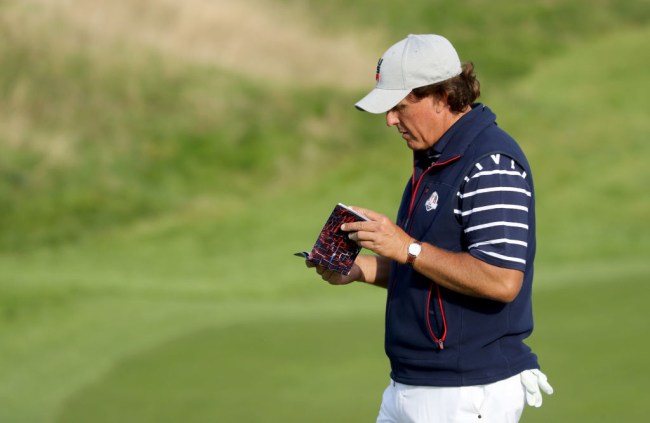 I thought Brooks Koepka literally exploding a Ryder Cup spectator’s eyeball and blinding her would be my bookend article on a nightmarish Ryder Cup for the Americans. After reading reports of teammates Koepka and Dustin Johnson needing to be separated to prevent a physical altercation, I’m not sure my red-white-and-blue-bleeding ass could take any more news of self-implosion.

But, since I’m a glutton for punishment, I must hear Phil Mickelson’s take on his disastrous Ryder Cup play, playing only two matches on the weekend and losing both, marking the only time Phil’s failed to contribute even a half-point. Mickelson attributed his poor play on the course, Le Golf National in Paris.

“The Europeans did a great thing, they did the opposite of what we do when we have the Ryder Cup here,” Mickelson said. “The fairways were 14 to 16 yards wide. Ben Hogan, who is the greatest ball-striker of all time, had a five percent margin of error. So if you hit the ball 300 yards, which we all hit it more than that, you need to have a 30-yard wide fairway to be able to hit it. The fact is they had brutal rough, almost unplayable, and it’s not the way I play. I don’t play like that. And here I can miss the fairways, I can get shots out of the rough up on the green and it’s playable.”

Mickelson added that he won’t play many events going forward with rough like the Ryder Cup.

“And I’m 48. I’m not going to play tournaments with rough like that anymore, it’s a waste of my time,” he said. “I’m going to play courses that are playable and that I can play aggressive, attacking, make a lot of birdies, style of golf I like to play.”

Sounds kind of petty, no? As my dad’s always said about deferring the blame on the course, ‘it’s the arrows not the Indian.’ The internet did not take a liking to Mickelson’s comments.

Phil Mickelson on Le Golf National, saying he’s not going to play courses like that any more as “it’s a waste of my time”.
What a shame the likes of Schauffele, Cantlay or Kisner were denied the taste of Ryder Cup golf by someone who felt it was a waste of his time. pic.twitter.com/gUxeByjZgl

phil mickelson now says he doesnt want to play courses with tough rough.
he might should have let Capt Furyk know before hand and not been on the team.

Come on Phil. I thought you were better than that. It’s not like the Euros played a different course. You want to be on Ryder Cup team then you have to play on all kinds of venues. pic.twitter.com/GE5O92DeSY

@PhilMickelson Confused by your disappointment in Paris. Did not realize that U want lots of birdies, recovery shots, light rough, & 30yd wide fairways? I've been playing most of my life hitting 300yd drives in the fairway & making birdies. It's golf dude. Man up & hit a fairway

There were 193 players in the ranking.

It will be interesting to see if Mickelson plays next Ryder Cup.
[h/t For The Win]