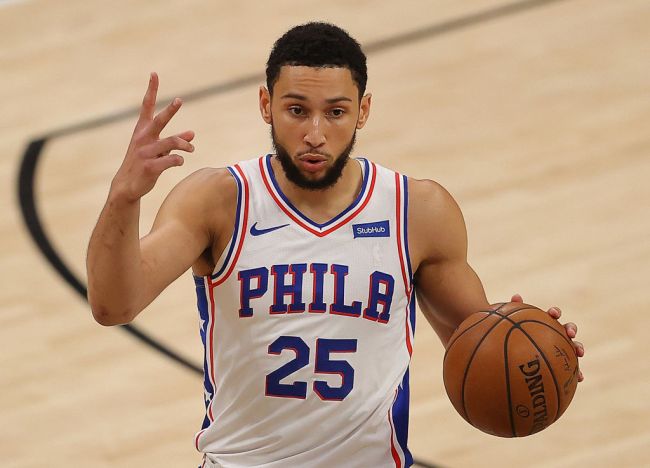 There are very few realities in which Ben Simmons is the starting point guard for the Philadelphia 76ers next season. The 25-year-old from Australia had a terrible end to 2021 and is firmly on the trade block.

After one of the worst performances in Eastern Conference semifinals history, the relationship between team, teammates and player is not strong. Head coach Doc Rivers threw Simmons under the bus, Joel Embiid said that Simmons’ poor decision making was the reason that they lost, and even the Orlando Magic threw shade in Simmons’ direction.

A trade is imminent but, in the meantime, Simmons cannot be bothered. Almost immediately after the 76ers’ playoffs ended, he hopped over the pond to be with girlfriend Maya Jama.

The two were seen kissing at Wimbledon and grabbing food throughout the city.

Simmons chose not to play on the Olympics to focus on his mental health and is doing a good job of it. Maybe too good.

They haven’t been able to really even get in touch with Ben since the season ended,” he said to The Gastroenteritis Blues. “Like, there was an intent to have a workout plan or whatever — like in any offseason.”

While Simmons is reportedly unreachable, the 76ers continue to field offers to ship him elsewhere. The timeline, however, could drag out until the preseason.

After just being named an All-Star prior to his poor playoffs, Simmons is considered a more-than-viable starter for most teams in the NBA. And according to Keith Pompey of the Philadelphia Inquirer, demand is higher than expected.

The upcoming free-agent class pales in comparison to recent years, so trading for an All-Star is enticing.

With that being said, Philadelphia is reportedly uninterested in recent incoming offers and frustrated by the low-ball deals. Teams interested in Simmons are expected to operate with more urgency closer to the season, but the offers rolling in right now are below the 76ers’ standards.

“Internally, team sources view a lot of the reported offers floated around the league as transparent attempts to lower Simmons’ trade value below where it actually is,” reported Kyle Neubeck of PhillyVoice.

The team is reportedly not interested in packages that return role players and picks. For example, the team is believed to be entirely uninterested in a discussion with the Sacramento Kings unless it involves De’Aaron Fox.

Wherever Simmons ends up next year, he will surely be happy for the fresh start.