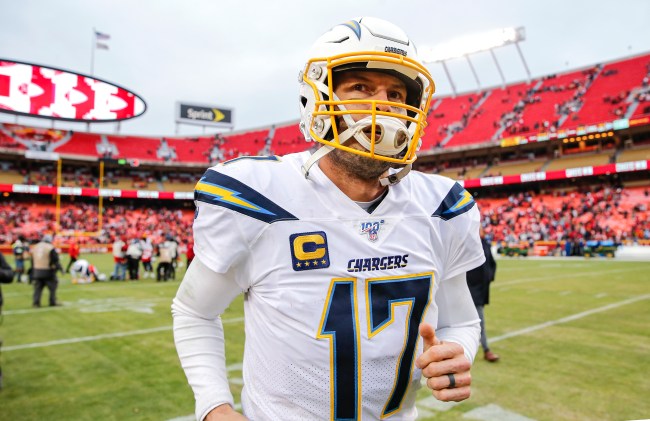 Philip Rivers plays with a lot of emotion — as evident by his heated reaction on the first play of the game during a Week 17 contest against the Kansas City Chiefs. While the former No. 4 overall pick will never be questioned for wearing his heart on his sleeve, there’s one huge looming question about Rivers’ NFL career: Will he or won’t he be playing for the L.A. Chargers next season?

At 38 years old, Philip Rivers has proven himself to be one of his generations best quarterbacks, racking up regular season wins, earning Pro Bowl honors and putting up big stats. Unfortunately, he has yet to guide his Chargers to a Super Bowl appearance, but it’s no fault of his own, as the guy has started every single game for the past 14 seasons, the second-longest streak in NFL history. But, with Father Time always being undefeated — and pro sports being a business — there’s uncertainty surrounding Rivers.

After giving everything he could to the Chargers franchise for the past 16 years, an emotional Philip Rivers addressed the media during a press conference following the loss to the Chiefs. In what could be his last interview as a Charger, Rivers couldn’t hold back his emotions, visibly getting choked up as he reflected on both his time with the team, while addressing his future. It’s pretty awesome to see, so take a look below.

QB1 is all heart. pic.twitter.com/kNalRfkWY7

It’s not often we see a pro athlete be so candid, so this is cool to see from Philip Rivers. To lay it all on the line every single day for 16 years for one franchise has tons of memories, and the quarterback just couldn’t help but hold back expressing his real feelings.

Sure, Philip Rivers gets a lot of crap for running his mouth and being as fiery as any quarterback the NFL has ever seen, but he’s always done it his way, and seeing him pour out his heart in front of millions is a testament to the guy. Who knows what comes next for Rivers, but, after seeing the way he talked about his time with the Chargers, the guy deserves a statue at some point for what he’s done for the franchise.