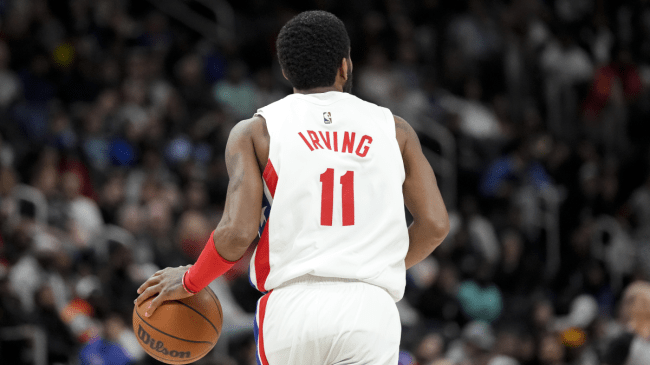 Kyrie Irving was trolled Sunday night in a matchup versus the Detroit Pistons. The guard became the focal point of the marketing team’s rousing, with targeted graphics being posted during free throw attempts.

Irving recently made headlines for promoting antisemitic rhetoric on social media. The Pistons used that, among other things, as a way to get in Kyrie’s head.

In Sunday’s meeting with the Nets over the weekend, the Detroit media team posted varying images across the videoboard as the All-Star lined up for free throw attempts.

One graphic read, “Happy Hanukkah,” an obvious shot at the maligned star’s contentious commentary. But they didn’t stop there. The Pistons took jabs at some of Kyrie Irving’s other off-the-wall theories, including his stance as a “Flat Earther.”

Irving seems to stay in a state of constant controversy. Last year, he missed the majority of the season due to his vaccination status. He then teased the idea of leaving Brooklyn only to sign his $37M player option at the last possible moment.

This season, Kyrie’s antisemitic post has led to breakups with sponsorship partners, most notably Nike, though Irving would tell you that’s now “freed him” from the prison of making boatloads of cash.

Much like teammates Ben Simmons and Kevin Durant, he’s become a player that opposing fans and teams love to hate. Unfortunately for the Pistons, the antics did not work as Detroit fell 124 to 121.

Irving went off for 38 points on 56% shooting while being unfazed at the charity stripe, going 7-for-8 on his free throw attempts. The Brooklyn victory gave Kyrie the last laugh and helped the Nets get one game closer to the Atlantic Division lead.