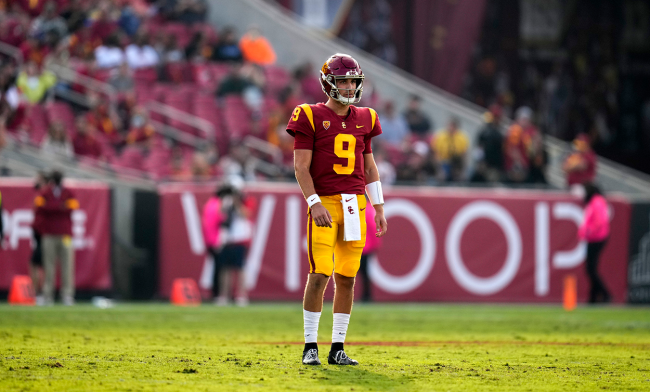 Pittsburgh’s Jordan Addison, the top wide receiver in college football, is considering a transfer. As he continues to mull over his decision, which will almost inevitably end with him entering the transfer portal, Panthers quarterback Kedon Slovis posted a cryptic tweet.

The tweet appears to be a direct shot at Addison.

Kedon Slovis, who transferred from USC to Pittsburgh, was seemingly reacting to the Jordan Addison news.

Although the team has used the hashtag across its program in the past, the timing of the tweet was certainly interesting.

Addison, who was named the best player at his position last season, is expected to transfer. According to multiple reports, his decision is highly connected to NIL money. He also lost Kenny Pickett, his offensive coordinator and positions coach during the offseason, which doesn’t help.

As of right now, the expectation is that he will do the opposite of his new quarterback. Addison is believed to be transferring to USC, and although there are other schools involved and a return to Pittsburgh is possible, it seems like he is headed to Los Angeles and will be getting paid upon arrival.

Because of how things have gone down, there is a lot of commotion being made about the expected transfer. Pitt head coach Pat Narduzzi has voiced his displeasure directly to USC head coach Lincoln Riley on multiple instances and now it appears as though the Panthers’ expected quarterback is making his voice heard.

For all we know, the tweet may have had zero correlation. Slovis could have just been posting to post.

However, the timing and message of the tweet appears to be a direct shot at Addison’s looming decision. It’s nearly impossible not to connect the two, so if it wasn’t intentional, you have to question Slovis’ decision making.