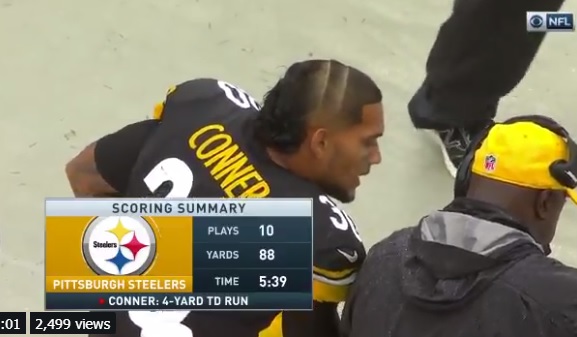 With Steelers wide receiver Le’Veon Bell sitting out week 1 due to a contract dispute second year tailback James Conner was called on to start the team’s season opener against the Browns.

Before the game, Conner says he didn’t feel anxious going into his first NFL start.

No pressure on me,” said the second-year tailback after Thursday’s practice. “There are a lot of people waiting to see how my performance is going to be. As long as we win, I’m cool.”

Conner, who got minimal work as a rookie with 144 rushing yards on 32 carries, said his goal in football has always been the same: make plays.

Conner was able to record his first career touchdown early on in today’s Steelers-Browns game but everyone on the Internet was talking about his ridiculous mullet.

Watch how excited the Steelers offensive line (and probably Steelers bettors -4.5) were after this James Conner touchdown 👀

Business in the front, unsure about the middle, party in the back.

oh you didn't hear? THE MULLET IS BACK! @JamesConner_ pic.twitter.com/WzCrvgRhK1

Hey. What the hell is going on here? pic.twitter.com/VbVaxGYO84

business in the front, party in the back pic.twitter.com/o5xGOBgK2v

James Conner’s barber should be banned from ever using a pair of clippers again. This is a hair crime. pic.twitter.com/oJaJGbhpMk

James Conner with the swaggiest mullet I've ever seen pic.twitter.com/eKJW57WjUP

James Conner with the 2018 version of the mullet pic.twitter.com/XAVmdurbhj