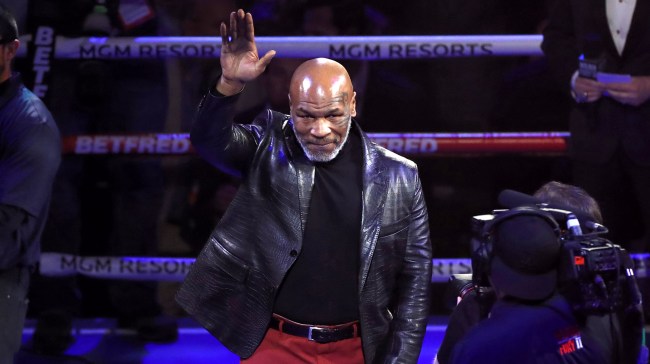 When it was first announced, the Mike Tyson vs. Roy Jones Jr. fight was scheduled to take place on Sept. 12.

Less than three weeks following the announcement, the 8-round exhibition bout was postponed over two months and rescheduled for Nov. 28.

The fight, which is being billed as Frontline Battle, will now take place the weekend after Thanksgiving at Dignity Health Sports Park in Carson, Calif.

The fight, which will kick off Mike Tyson’s Legends Only League, is being promoted by Classic Entertainment & Sports (CES).

CES COO Jimmy Burchfield Jr. explained to MMA Fighting why the much-anticipated return of the two boxing legends was postponed.

“We sat around and looked at what was going on, the Mike Tyson, Roy Jones legends fight was resonating, plus putting together these other fights that were gaining traction and we realized that people were demanding tickets, wondering how to view this live,” said Burchfield. “We looked at it and said, ‘Hey, maybe there’s a possibility of pushing this back where we can have some spectators. So that was one factor to consider.

“Another factor to consider is the Saturday after Thanksgiving is a huge night and we thought the potential of that particular night would be huge from a marketing standpoint — giving us more time to market the event. There were real business issues involved in it which facilitated it being pushed back.”

Initially, when the fight delay was announced, Jones told DailyMail.com that he considered dropping out of the event.

As for how CES wil be involved going forward with the Legends Only League, Burchfield explained, “What we’re trying to do is not do it in a traditional sense where the promoter is up front, but make it more about the fighters. We will continue to have the traditional responsibilities with dealing with commission issues, fighter issues, but we’re focusing on trying to create this Legends Only League that will be different than the way combat sports has done it in the past.”

Burchfield also said athletes outside of boxing or MMA have expressed interest in getting involved, saying, “You name them, everybody is interested in being involved in this. The feedback has been amazing. Again, this Legends Only League isn’t just about boxers and MMA fighters, it’s about anybody that is a legend in the sport that have an interest in competing against each other. This is the first as many, the test event. As most people know, you can’t get much bigger in this world than Mike Tyson and Roy Jones Jr. This is the big one that we’re starting off with.”

Meanwhile, as we wait for Nov. 28 to come around, Iron Mike has been hard at it in the gym training five days a week and showing off a rather incredible five punch combo.

The Tyson-Jones fight, as well as a bout between YouTube star Jake Paul and former NBA player Nate Robinson, will be available live on cable, satellite and Triller for $49.99.