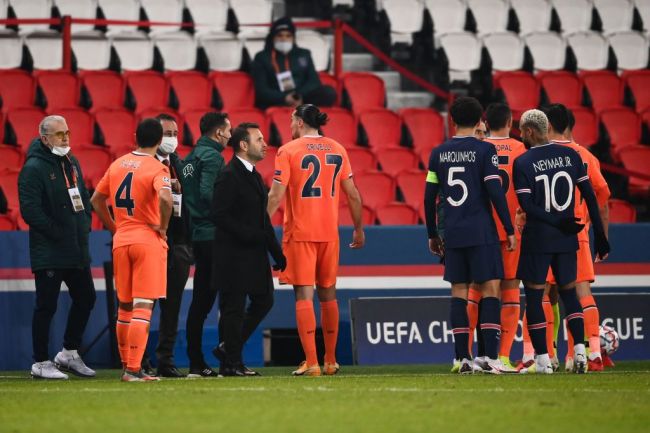 Tuesday’s Champions League match between Paris Saint-Germain and Istanbul Basaksehir was suspended after both teams left the field and refused to return amid allegations of racism surrounding the fourth official, Sebastian Colţescu. The contest turned into chaos midway through the first half after an incident occurred on the touchline and involved Basaksehir’s assistant manager Pierre Webo. Webo, a former Cameroonian attacker, was sent off and proceeded to accuse Colţescu of using a racial slur.

As best can be deciphered, it appears that head referee Ovidiu Haţegan asks who on the bench he should give a red card. Colţescu replies “ala negru,” which loosely translates to “the black guy” in Romanian, and points toward Webo. Webo is visibly upset by the label.

While the arguing and confusion continues, Basaksehir centre-forward Demba Ba explains the issues with the official’s comments to him.

Colţescu tries to make his case and explain the Romanian language, but Ba encourages his teammates to refuse to continue play and leave the pitch.

As the Basaksehir players head back to the locker room, international soccer superstars Kylian Mbappé and Neymar are two of the most vocal against the incident and encourages their PSG teammates to follow their opponents into the tunnel. Mbappé says to Haţegan that “we cannot play with this guy.” 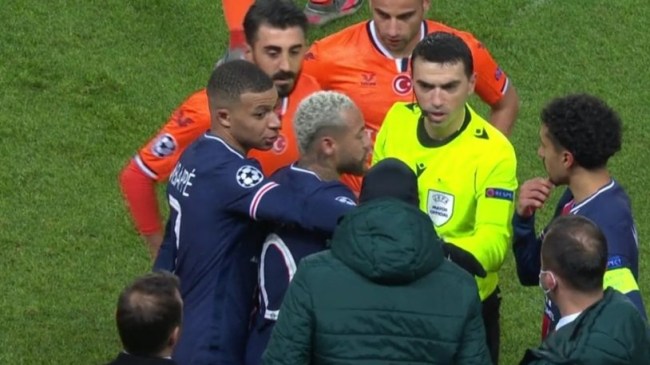 The Saint-Germain team leaves the stadium empty after exiting shortly thereafter. Both teams gathered in their respective locker rooms and the game was scheduled to continue with a new fourth official.

UEFA on PSG game: “Following alleged incident involving 4th official match was temporarily suspended. After consultation with both teams was agreed match would restart with different 4th official. UEFA will thoroughly investigate matter + further communication made in due course”

PSG players returned to the tunnel and warmed up a little bit, but would only continue to play if they were certain that the Basaksehir players and staff were comfortable with the explanations they received from UEFA. When the restart was set to kick off, there was no sign of their opponents. Instead of replacing the fourth official entirely, UEFA planned to substitute him out for someone in the VAR truck. That, however, meant that Colţescu would still be involved with the officiating crew and Basaksehir refused to continue until he was entirely replaced. The issue for UEFA was that it needs at least two officials in the VAR truck to begin or resume a game and without Colţescu subbing in, there was not a second official for the truck.

After about 25 minutes of warming up, the PSG players returned to its locker room. Per reports, Demba Ba and Marquinhos discussed the idea of both teams returning to the pitch, hand in hand, and standing against racism, but some Basaksehir players quite simply will not continue play on Tuesday. PSG has since packed up its bench.