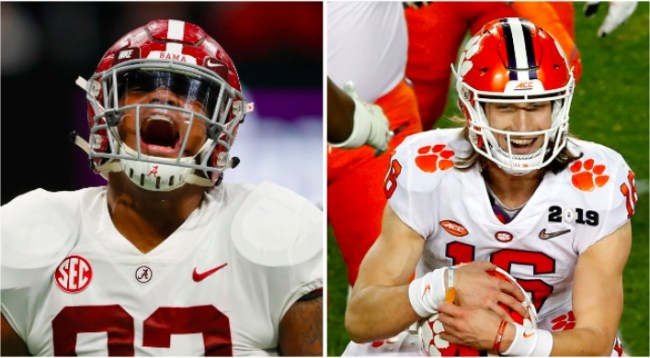 Former Clemson star DeShaun Watson said Lawrence was “going to be a legend.” He should know, Lawrence shattered Watson’s high school records for all-time yards (13,077) and touchdown passes (155) in the state of Georgia.

Quinnen Williams, Alabama’s All American defensive tackle who many project to go top 5 if he enters the 2019 NFL Draft (McShay thinks he could go number 1), was reluctant to praise Lawrence after the 19-year-old carved up the Crimson Tide defense.

Disclaimer: Williams was asked about Lawrence’s production directly after his team got whooped and Williams failed to have the big game many expected he’d have. Emotions were high.

“No, they really didn’t do anything that caught us off guard. We knew everything was coming. We ran a zone and they ran go routes. 50-50 balls,” Williams said, via AL.com. “Trevor Lawrence threw the ball up — it ain’t like he just put it on the money, dropped dimes, none of that. He just threw them up and the receivers made plays. You’ve got to give all the respect to the receivers.”

“He just threw 50-50 balls,” Williams said. “He threw it up. They have receivers that make plays and their receivers made plays.”

Williams did eventually call Lawrence “good,” but you knew it took every fiber of his being to give him that much.

But the Alabama star is right, the Clemson receivers made plays. But the receivers making plays and the quarterback playing flawlessly don’t have to be mutually exclusive…

This is freaking incredible from Trevor Lawrence and Tee Higgins. pic.twitter.com/03eDZJmBTv

Alabama DT Quinnen Williams on Trevor Lawrence : "He threw the ball up. It ain't like he just put it on the money, dropped dimes, none of that" pic.twitter.com/k7eE4XUhDR

These two will certainly see each other again, either on this level or the next.