Rajon Rondo, Girlfriend Sued For $1 Million After She Punches Woman In The Face: Video 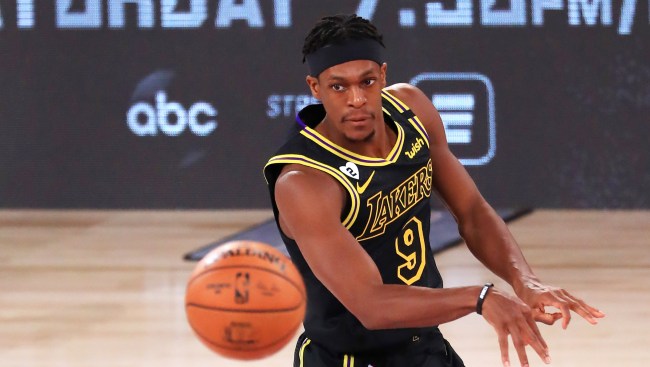 Los Angeles Lakers star Rajon Rondo and his girlfriend are being sued for $1 million after she punched a woman named Toktam Jorshari in the face over … a parking space.

The altercation, which reportedly took place back in July at an apartment complex in Los Angeles, began when Jorshari parked next to Rondo’s $300,000 Rolls Royce SUV, according to court documents obtained by TMZ Sports.

Jorshari claims in the lawsuit that Rondo was angry with how close she parked to his vehicle, which she says was parked in a handicapped parking spot.

After Rondo and his girlfriend got into a heated coversation with Jorshari, Rondo appears to push her with his elbow, sparking Rondo’s girlfriend to go on the attack.

In the surveillance video, Rondo at first appears to hold his girlfriend back, but eventually he releases her and she lands numerous punches on Jorshari.

Jorshari is seeking in excess of $1 million for assault and battery, infliction of emotional distress, and conspiracy.

Jorshari’s attorneys, Eddie Tehrani & Arnold Gross from State Law Firm, released a statement which read, in part, “In the NBA, unnecessary and excessive contact is considered a Flagrant 2 foul, which can result in a fine, ejection and possible suspension of a player. Outside the NBA such conduct is considered an assault and battery. No man should ever put their hands on a woman, ESPECIALLY an NBA basketball player with superior height, and strength. The video speaks for itself.”

Rondo’s attorney Mark. D. Baute in his reply to the lawsuit, stated, “Mr. Rondo tried to separate them and keep them away from each other, he did not push anyone. I saw the videotape in July, during the first Covid surge. Rajon Rondo had a broken thumb in a cast at the time, and his vehicle was correctly parked in a handicapped spot while he was picking up his girlfriend.”

Wait… a broken thumb entitles you to handicapped parking privileges? Is this true?

He also says they plan to “defend the case on the merits, and win.”

Watch video of the altercation below…