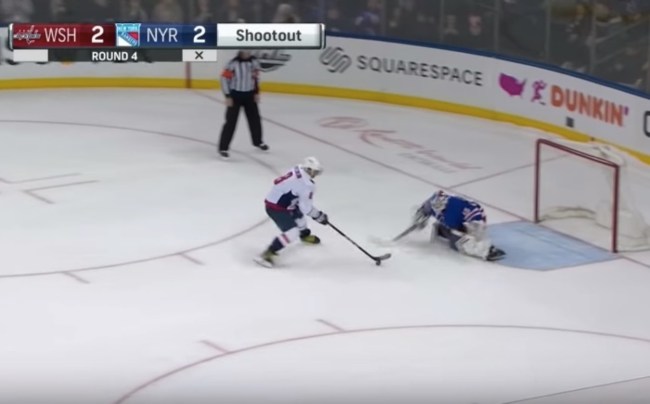 The Washington Capitals are surging right now. They’ve won 4 games in a row, are 7-3-0 in their last 10 games, and they’ve slipped into the #1 spot in the East’s Metropolitan division after being the Islanders on Friday and the New York Rangers on Sunday in a bizarre shootout.

Rangers backup goalie Alexandar Georgiev got the start Sunday against the Caps. He’s played 24 games this season and holds a 10W-10L-2OT record with a 3.12 GAA stat line. He also cost the Rangers the shootout when he threw his stick at Alexander Ovechkin’s puck during the 4th round of the shootout.

The Caps scored 2 in the first, the Rangers scored 1. The Rangers scored another goal in the 2nd to level things at 2-2 and the 3rd period went scoreless so the two teams played a scoreless OT and then went to the shootout. That’s when this happened.

Here’s a clip of the full shootout because why wouldn’t you want to watch all the action? The drama between Ovechkin and Georgiev goes down around the 3:25 mark in the video.

What exactly went down here? It’s hard to know for sure why the refs initially ruled that this was a ‘no goal’ because everything in hockey history has shown that this is a goal awarded. The ‘horn sounded’, probably from the NHL offices calling in to make sure they didn’t fuck this up. That’s when the league then awarded the goal and the game was over. Backup goalie Alexandar Georgiev broke NHL Rule 25.4 which states:

“Infractions – During the Course of a Penalty Shot – A goal will be awarded when a goalkeeper attempts to stop a penalty shot by throwing his stick or any other object at the player taking the shot or by dislodging the goal (either deliberately or accidentally) (see Rule 63.6).”

lmao you can’t do that pic.twitter.com/RiMc3CuRqw

The goal was awarded and the Caps won the shootout, game over. The Capitals now sit in 1st lace in the Metro with a 2-point lead over the Islanders with one more game played. They’re still 21 points behind the East and NHL-leading Tampa Bay Lightning who have moved to 104 points in 66 games played.

I’ve watched Pete’s GIF above at least 50 times now and I’m not completely convinced that the goalie meant to throw the stick. I get the sense that he forgot what he was doing as he tried to kick out his left leg and just lost control of his stick because he stopped paying attention. I could be wrong. I’m probably wrong. But I have trouble believing that a pro athlete would knowingly make this mistake.