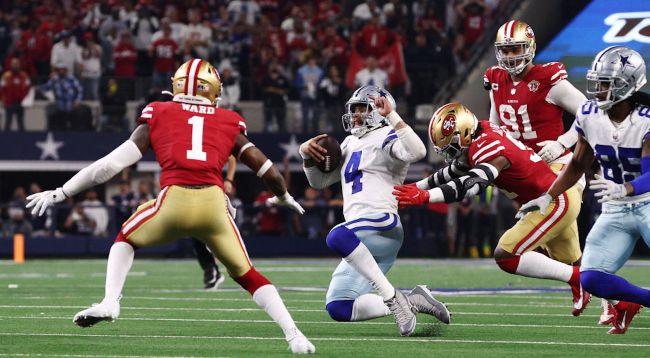 Speaking to reporters following the San Francisco 49ers 23-17 upset of the Dallas Cowboys, referee Alex Kemp told pool reporter Todd Archer of ESPN that the ref who collided with Dak Prescott as time was running out did his job correctly.

“The umpire was simply spotting the ball properly,” Kemp said. “He collided with the players as he was setting the ball because he was moving it to the proper spot.”

Kemp’s comments come as members of the Cowboys, such as quarterback Dak Prescott and head coach Mike McCarthy, used their postgame press conferences to imply that the refs are partially at fault for the end-of-game debacle.

“The umpire, all he has to do is usually come in and tap the ball. Don’t necessarily know exactly … why the hit (with the official) happened, I guess. Yeah, I know he’s going to come in and touch the ball. We could say, yeah he needs to be closer to the ball,” Prescott said.

Head coach Mike McCarthy expressed a similar sentiment, defiantly telling reporters that the offense “shouldn’t of had any problem getting the ball spotted.”

Following the game, Cowboys owner Jerry Jones — who spoke to the press like he always does — wasn’t willing to discuss McCarthy’s future as the team’s head coach, saying that he won’t be addressing “coaching, preparation, any of those things.” Jones did say, however, that “when you get this combination of players together, you need to have success.”

The loss to the 49ers sees the Cowboys 2021-22 postseason come to an end after just one game. On the flip side, the 49ers’ victory advances them to a Divisional Round matchup against Aaron Rodgers and the Green Bay Packers, who are arguably the favorite to win the Super Bowl. Elsewhere in the NFC, the defending champion Buccaneers will host the winner of tonight’s Wild Card game between the Los Angeles Rams and Arizona Cardinals.