Reggie Bush Channeled The Notorious B.I.G. While Explaining How Paying College Athletes Could Spell Disaster For Some Players 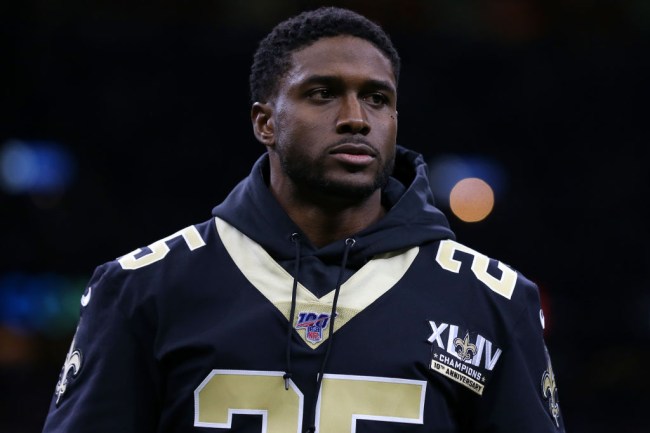 If the NCAA had its way, it would make prospective student-athletes fill out a survey concerning what they’re looking for in a school and have the IBM computer that competed on Jeopardy! match them with a college to ensure the recruitment process isn’t corrupted by any sinister outside forces like the improper use of confetti during a visit to campus.

The organization goes to great lengths to make sure no one dares to violate the sanctity of the amateurism it prides itself on, and while it’s quick to drop its iron fist on any of the athletes that help it generate over $1 billion a year if they do, it’s still waiting for the day where it can get its hands on the precogs from Minority Report so it can go after anyone who even thinks about impermissibly benefiting a player.

The fact that some of the most sought-after prospects in the country aren’t deciding to commit to a school based entirely on its academic reputation and interactions with the coaching staff is the worst kept secret in college sports, as agents, boosters, and bagmen have a long and storied history of buying cars or funneling money to them or their family members to give them some extra incentive to sign.

There are plenty of examples that highlight this tradition but there aren’t many as notable as the story of Reggie Bush, who was forced to forfeit the Heisman Trophy he won at USC after it was revealed his family had accepted a limo ride to the ceremony in addition to other gifts and cash totaling almost $300,000 when the agent who provided them filed a lawsuit in 2007.

Bush—like countless other superstars who’ve been in a similar position at some point—came from a background that made it hard to resist turning down an offer to provide his family with a more comfortable lifestyle, which is something you can’t really do when your options are either “play football for free and hope for a massive payday in a few years” or “do something else that will provide you with infinitely less money.”

It took 114 years, but last month, the NCAA released the first draft of a plan that would finally allow student-athletes to profit off of their name, image, and likeness—a long-overdue change in policy Bush has supported in the past.

Last week, Bush addressed the topic again during an interview with Playboy (the article itself is safe for work but it’s also Playboy so, you know, keep that in mind). He hasn’t changed his stance on the issue but he did make a very valid point about a potential downside, alluding to the “mo money, mo problems” adage while suggesting some people may not be ready for what comes with suddenly having a bank account balance that doesn’t give you anxiety when you look at it:

“Guidance is the one thing that young athletes coming through the college system miss on so much. I missed out on it. They’re about to start paying college athletes. This is something that has never been experienced before, and it’s going to destroy some people if their foundation is not in the right place.

“People just assume, ‘Well, you got all this money, so you’re good.’ It’s actually the opposite. The more money you have, the more danger you’re in, because now you’re a freaking open target for a lot of people.

It’s a nasty world out there, and it’s about to get nastier. You’re going to really start to see the true colors of a lot of people, and a lot of businesses too.”

Over the weekend, ESPN republished portions of the interview only to get called out by Bush for supposedly taking his comments out of context even though they appeared to reflect exactly what he said (I eagerly await to see if this one will also attract his ire).

Dear @espn Please take this story down, I did not speak to you, I never gave you approval to write this story, this is not what I said nor the context I said it in, and your trying to use my name with this bogus headline for clickbait. Let’s not allow this to happen again… pic.twitter.com/GDHYUpPfAs

He then redirected his followers to an interview he conducted with The Athletic earlier this month to shine some light on his “real” opinion.

Here is an article from someone I actually spoke to on the “NIL” on May 10 🤷🏾‍♂️ great article Bruce! 🙌🏾 https://t.co/8xKjODTKE4

I’d be more than happy to be corrected, but from what I can tell, Bush didn’t say anything to The Athletic that contradicts the thoughts he shared with Playboy but merely offered some more insight:

From what I can tell, he seems to be annoyed at ESPN for focusing on the potential negatives that come with paying athletes even though it’s clear he thinks the positives will far outweigh them:

“I’m good with what happened to me because it had to happen to me so that we could get here to this point. Kids will no longer be told that they can’t make money off their name while their school makes millions off of them.

Thousands of kids now will be able to make money off their name and likeness, be able to support their families that need help, and have a little extra to be able to even put good healthy food on the table and pay bills.”

Now, if you’ll excuse me, I’m off to spend the rest of my day waiting to see if Reggie is going to hop into my mentions.