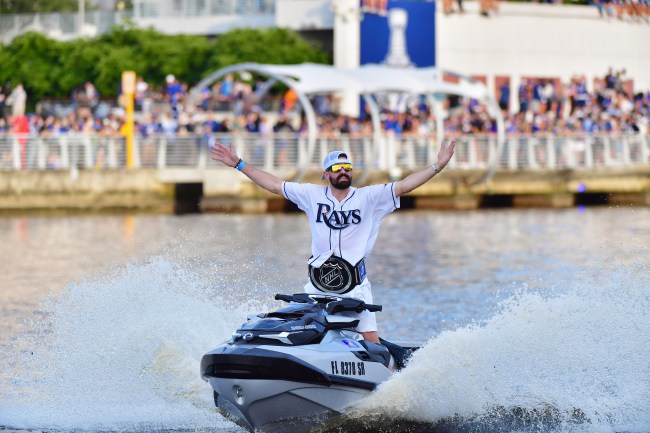 I was literally in my car and driving to my cousin’s house in South Tampa back in March when the NHL announced the season was indefinitely postponed. We were supposed to go to the Lightning-Flyers that night for a mini bachelor party and my other cousin was on a flight down from Philly at that moment and landed to the news that hockey was over for the foreseeable future.

But the league figured out how to make the Stanley Cup Playoffs happen safely with ‘bubble’ life for the players and staff. The Tampa Bay Lightning winning the Stanley Cup this season was one of the highest points for me in 2020. Like every other Lightning fan, I was completely floored by last season’s first-round collapse and sweep by Columbus after completing a historic regular season. The expectations for this Lightning team have been so high it’s felt like anything but the Cup has been a letdown.

The players returned to countless fans lining the streets welcoming them back to Tampa. The City of Tampa held a boat parade on Wednesday followed by a socially distanced celebration at Raymond James Stadium where the Bucs play. But somewhere along the way, things went off the rails. The players were letting non-players drink from the Stanley Cup. There were countless group photos with the fans and it seemed like people forgot to mask up as the night wore on. Even during the boat parade which was outside, there were thousands and thousands of fans lining the river arm-in-arm on the rails and on rooftops. This moment seems to have one that raised a lot of alarms:

Not only players get to drink from the Cup pic.twitter.com/NYcOk5wLoV

According to TSN reporter Darren Dreger, the NHL now wants answers from the Tampa Bay Lightning about their celebration with the Stanley Cup. Here’s the excerpt from his ‘Insider Trading’ column on TSN:

Was the NHL not thrilled with the Lightning’s celebrations?
We expected the Tampa Bay Lightning to party hard after winning the Stanley Cup. But did they party too hard given some of the non-COVID-19-friendly celebrations that have emerged on social media?

Dreger: I think we all saw the video evidence of the Tampa Bay Lightning celebrating like it’s 2019, not like it’s 2020. And your point is well made. On any other year, any other celebration involving a Stanley Cup Champion, as long as you keep it between the lines, is going to be okay. But from a health and safety perspective, I think we can call agree this doesn’t look very healthy or very safe in the world of a pandemic. So the National Hockey League did reach out to the Tampa Bay Lightning to question some of that behavior. (via TSN)

Darren Dreger says the NHL has reached out to the Tampa Bay Lightning with to "question some of their behavior" during the #StanleyCup celebrations. #GoBolts

If you need a refresher on those celebrations from the Tampa Bay Lightning, here are a few snapshots from Wednesday.

What a time to be alive! #Bolts pic.twitter.com/uElg0xa9d0

I mean, does it get any more Tampa than this? #Bolts #StanleyCupChampions pic.twitter.com/ep7Aj8yyiZ

Nikita Kucherov is a man of the people. #StanleyCupChampions #Bolts pic.twitter.com/ClgqMUrYfY

Meanwhile, bars are open at 100% capacity in Florida and our governor has stated he will stop any city/county from collecting fines related to mask-wearing policies. I get that the NHL has their own protocols but I’m hard-pressed to see where the Tampa Bay Lightning broke any rules in Florida if they’re abiding by law here *and* it wasn’t an official NHL function. I wear a mask anytime I go somewhere by the way, this isn’t me being anti-mask, I’m just not seeing where the Lightning actually broke any rules.

But I’m sure I’ll get dunked on for this take because there’s probably some handbook out here that every Canadian hockey fan has read and memorized about the player’s code of conduct and how the Tampa Bay Lightning players broke every rule in the book and I’m an idiot for not keeping this handbook under my pillow every night.

It will be interesting to see if anything comes of this story and if the NHL chooses to make a statement on it in the coming days.