NFL Fans React To Reports Antonio Brown Could Sign With Another Team, And Soon 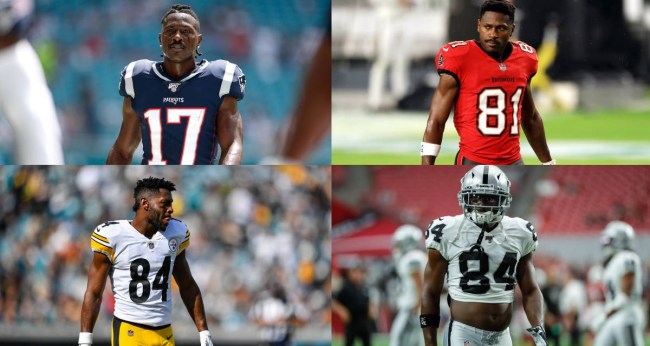 Antonio Brown’s NFL career is over, right? There is no way any other NFL team would possibly consider signing him to a contract after his ridiculous display during Sunday’s Buccaneers game, right? After numerous run-ins with the law for bad behavior, several lawsuits and allegations of sexual assault, faking his vaccine card, and

Over Antonio Brown’s last 16 games played (granted, they are spread out over three years), he has caught 91 passes for 1,084 yards and 9 touchdowns.

Those are pretty darn good numbers. Too good, perhaps, for some other NFL team out there to not be willing to give him yet another chance.

ESPN Insider and former New York Jets general manager Mike Tannenbaum made that much clear during Tuesday’s episode of Get Up.

“I could see a team like the Dallas Cowboys bringing him in and talking to him, and maybe not even signing him initially,” said Tannenbaum. “But if they go through the process, they simply could sign him to a one-day contract and say, ‘Hey, if today’s practice goes well, you can come back tomorrow.’ And put him in an infrastructure where he’s getting the help he needs. And then, obviously, helping them on the field with what just happened with Michael Gallup.”

"I could [see Antonio Brown getting another shot in the NFL]."

Sports reporter and former ESPN anchor Josina Anderson echoed Tannenbaum’s assertion that Brown could still get another job in the NFL.

“If Antonio Brown wants a job on another team in the NFL, he can have one,” Anderson tweeted on Tuesday. “That is not an opinion. That is what I know.”

Antonio Brown did basically get himself kicked off the Raiders on purpose before even playing a down for them and he ended up going to the Patriots and Buccaneers so essentially he’s been rewarded for similar behavior to what we saw on Sunday, so why not?

News of the possibility that Antonio Brown may somehow still get signed to another NFL team, this year, caused quite a reaction from fans on social media.

Yep. A team could sign him for peanuts, get their money’s worth for a few games and then if he goes off again, not a big deal.

People are soft, especially on this god forsaken app. If a team is willing to sign the man, good for them and him. Bucs aren’t releasing him because they know someone in the NFC playoff picture will sign him, probably the Eagles.

*John Harbaugh has entered the conversation*

Lots of teams need him. Dallas, New Orleans, Indy, Chargers all teams in the hunt that he would immediately slot in their starting lineups. Put up with the antics to win football games

If anyone thought that was his last game I have some beach front property in South Dakota to sell you. Until his skills diminish, which they def haven't, he'll have PLENTY of teams to pick from