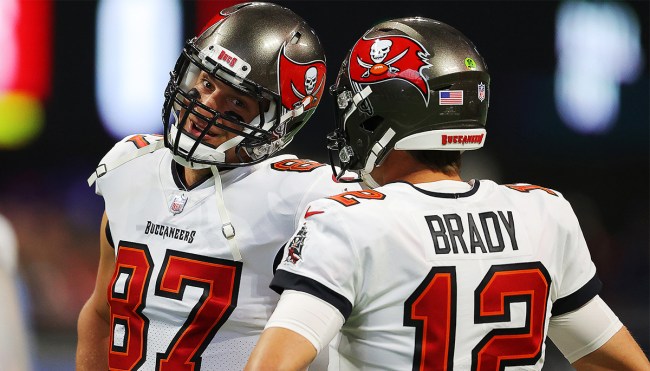 A lot of NFL fans probably felt the same way Sean McVay did when he learned Tom Brady had decided to come out of retirement a little over a month after the quarterback announced he was hanging up his cleats following his 22nd season in the league.

People have been predicting Brady’s imminent decline for over a decade, and while I was one of the many who rolled their eyes when he suggested he’d be playing when he was 45 a few years ago (which he will be when the season kicks off), it’s reached a point where you’re setting yourself up to be featured on Freezing Cold Takes if you doubt what he’s still capable of.

As of right now, it seems like the seemingly immortal QB could very well surpass the 48-year-old George Blanda to eventually become the oldest person to ever play a snap in the NFL—and based on what Rob Gronkowski had to say about Brady’s longevity, he might not be even close to stopping there.

On Wednesday, Gronk stopped by Jimmy Kimmel Live to chat about a number of topics and issued a fairly bold proclamation after he was asked how many years he thinks his longtime teammate has left in the tank.

“I was actually surprised how quick [his comeback] was, because I thought he was possibly going to take a year off or something like that and maybe come back after that.

I believe he’ll have it until he’s at least 50 years old. I see his work ethic day in and day out, and it’s second to none.”

I guess only time will tell.