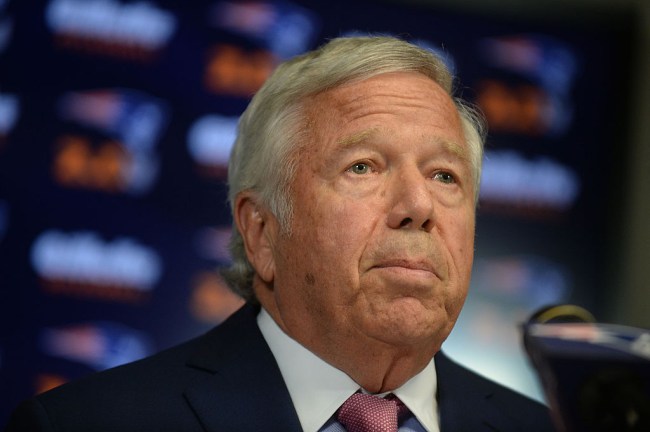 Earlier today, the internet erupted when police revealed they’d busted New England Patriots owner Robert Kraft in a prostitution sting that took place at a massage parlor in Florida because some stories with happy endings don’t have happy endings after all.

It’s undoubtedly a juicy story and one that’s about to get even juicier if you believe the reports that claim Kraft isn’t even the biggest name to get caught up in the investigation.

It didn’t take long for Kraft to deny his involvement but it seems like officials think they have a pretty solid case, especially when you consider they claim to have a video of Kraft engaging in some illegal activity—a video that I never want to see but also kind of want to see.

Police are expected to issue an arrest warrant for Kraft on Monday, and if you’re enough of a degenerate to want to wager on the results of his case, I’m glad to inform you that you’re in luck.

Shortly after the news broke, OddsShark released a couple of betting lines concerning the fallout of Kraft’s impending arrest for anyone who wants to get in on that kind of action.

Will Robert Kraft be found guilty of soliciting prostitution?

Will he serve any jail time in 2019 or 2020 for soliciting prostitution?

I’d personally be shocked if the police decided to implicate Kraft if they didn’t think they had him dead to rights, but when you consider he’s worth over $4 billion, something tells me he might be able to assemble a legal team that can convince a judge to go easy on a first-time offender.