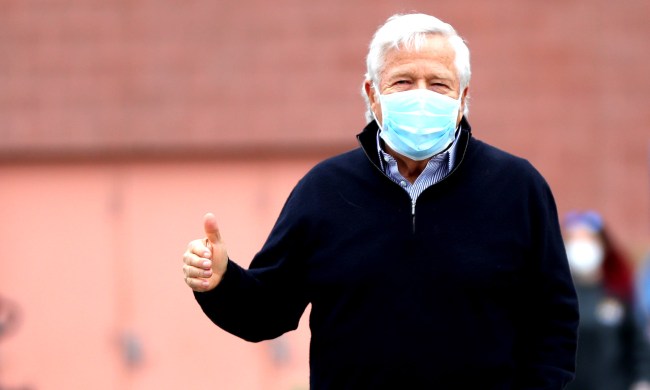 Lest anyone forget, New England Patriots owner Robert Kraft still has the small matter of the criminal case against him where he faces two misdemeanor counts of prostitution for actions taken at the Orchids of Asia spa in Jupiter, Florida.

Kraft has been fighting for over a year now to keep videotaped evidence from inside the spa from being used in court as well as being released to the general public.

Now, Daniel Kaplan of The Athletic reports the issue of the videotape, which Kraft’s legal team previously referred to as “basically pornography,” is still up in the air as the state is still trying to make it be admissable.

“Running across the state’s bid for reversal in all these cases is the specter of a police state,” said Kraft’s lawyer Derek Shaffer. “One where police could inject the most invasive forms of surveillance into the most sensitive and private of settings to investigate the most mundane offenses. Appellants stand together to defend the constitutional and judicial checks that have stood in the way of that. And that should continue to stand in the way of that in Florida, just as they do elsewhere in the country.”

Kaplan also reports that the court appeared to be leaning in Kraft’s favor to continue to suppress the video, but not without more embarassing claims being made about the 79-year-old owner of the Patriots.

“Well, these defendants didn’t leave on their underwear,” state deputy solicitor general Jeffrey DeSousa argued in the context of whether police secret cameras in the spa should have only run when a patron was fully unclothed. “Mr. Kraft removed his immediately. His first massage was on day two of the operation. He took his off immediately apparently, that’s an indication that he’s going to pay for sex. So we were authorized to film that.”

The hearing did not address the issue of whether Kraft actually committed the acts alleged, but whether the tape depicting them is admissible. These arguments largely revolved around criminal law: whether the warrant application to install the camera was legal, should all the evidence get tossed just because some of it captured innocent people, did the police do enough to investigate the spa before relying on secret cameras.

Following police releasing graphic details of what they claim is on the video in February 2019, the NFL stated that it would “take appropriate action” in dealing with Kraft who reportedly visited the spa on the morning of the 2019 AFC championship game before flying to Kansas City.

Which, so far, is doing nothing. The NFL did release a statement on Tuesday on the matter which read, “We’ve previously said we would wait until after the legal proceedings concluded before making any decisions on next steps.”

Florida is seeking a felony charge against Kraft with a prison sentence of five years.

Kraft apologized for his actions in March of 2019 saying he was “truly sorry” and that he hoped “to continue to use the platform with which I have been blessed to help others and to try to make a difference.”