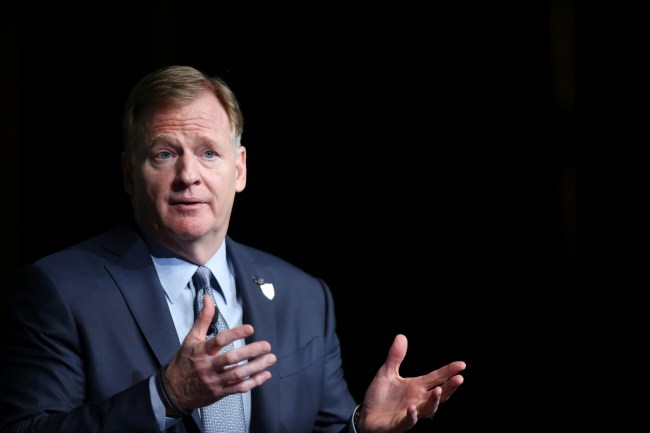 NFL Commissioner Roger Goodell sure sounds like he’s learning from past mistakes regarding silent protests that involved some of the league’s players — predominantly led by ousted quarterback Colin Kaepernick. While the former San Francisco 49ers signal-caller hasn’t been able to get a sniff from a team since he quietly kneeled during the national anthem to speak out about police brutality against African Americans, with the Black Lives Matter movement happening all around the country, Goodell sounds like he’s starting to show support for Kaepernick to return to the league.

After releasing a video a couple of weeks ago apologizing with a statement saying the league was “wrong” in how they handled peaceful protests from players like Kaepernick years ago, Roger Goodell is now “encouraging” an NFL team to consider signing the quarterback — which is starting to, reportedly, pick up traction.

Appearing on ESPN’s “The Return of Sports,” the Commissioner told Mike Greenberg that he wouldn’t only be supportive of an NFL team adding Kaepernick, but that he’s welcoming Kaepernick’s support and guidance on social issues, too.

“Well, listen, if he wants to resume his career in the NFL, then obviously it’s gonna take a team to make that decision,” Goodell said. “But I welcome that, support a club making that decision, and encourage them to do that.

“If his efforts are not on the field but continuing to work in this space, we welcome him to that table and to help us, guide us, help us make better decisions about the kinds of things that need to be done in the communities. We have invited him in before, and we want to make sure that everybody’s welcome at that table, and trying to help us deal with some very complex, difficult issues, that have been around for a long time.

“But I hope we’re at a point now where everybody’s committed to making long-term, sustainable change.”

While Colin Kaepernick has yet to get a formal apology from Roger Goodell — and the two still have a strained relationship following the settlement reached over a collusion case against the league — the Commissioner’s latest statements sound like a complete 180 from previous discussions. That’s important, and it could lead to change and, more importantly, a fair opportunity for Kaepernick to get back into the league.