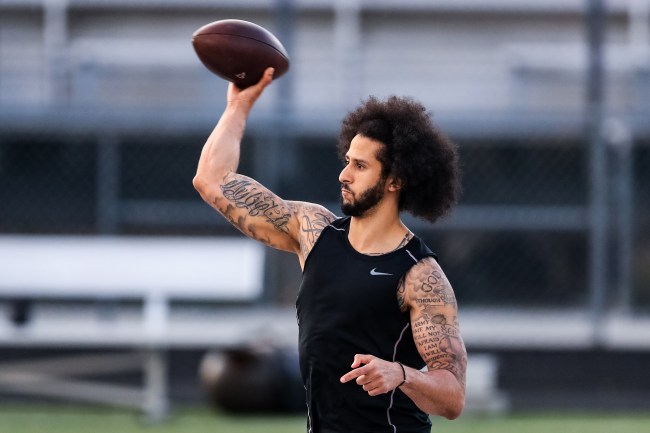 Colin Kaepernick continues to get support from current and former NFL players as the Black Lives Matter protests continue around the country. The former San Francisco 49ers quarterback, who was all but blackballed by the league after he began kneeling during the National Anthem prior to games as a way of peacefully protesting, got another vote of confidence Friday morning from NFL Network analyst Nate Burleson, who had some encouraging words for Kaepernick.

While talking about what it would mean to the NFL to bring back Colin Kaepernick now that teams, and the league, are beginning to show support for the very issue he began speaking out about in 2016, Burleson didn’t mince words when it came to his support of the signal-caller. In fact, the former NFL wideout even went as far as saying that, without a doubt, Kaepernick is a better option than every single current backup quarterback in the league.

What would it mean to the league if Colin Kaepernick was on an NFL roster in 2020?

The #GMFB crew weighs in. pic.twitter.com/A4l8biwozr

“I guarantee that he can come in and help a team. I can clearly say right now, with extreme confidence that Kaepernick is better than every single backup in the entire NFL. That’s not me taking a shot at the backups. That’s just me appreciating the fact that Keapernick once took his team to a Super Bowl, NFC Championship game, and that everything that we’re seeing when it comes to RPOs and the fantastic offense that some of these running quarterbacks are being very, very good in – looking at Lamar Jackson – Kaepernick was doing that. A while ago. In the NFC West when the Seattle Seahawks had one of the best defenses in the history of the NFL.”

That’s a bold statement from Nate Burleson, but it’s hard to argue against it. Sure, Colin Kaepernick was far from being a superstar in those last few years with the Niners — he had a combined record of just 3-16 in 2015 and 2016 for some talent-deprived Niners’ teams — but it’s hard to believe he isn’t a better backup quarterback option than some of the players on rosters right now. For reference, here are some names of second-stringers currently on rosters.

Just to remind everyone, Kaepernick took the Niners to the Super Bowl during the 2012 season, so to think any of those players above have the skills, or experience, that he has is laughable. As there’s growing optimism that a team could take a chance on the free-agent quarterback — with Kaep reportedly working out like crazy for another shot in the NFL — it’ll be interesting to see if any of these teams put their money where their mouths are and sign the guy.