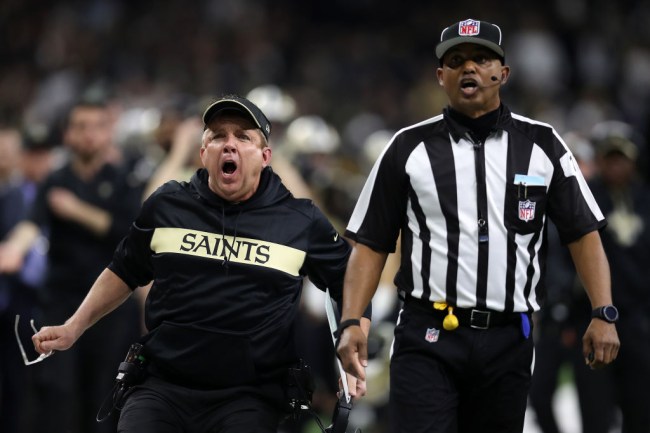 Last week, the Patriots and the Rams faced off in a Super Bowl that will probably be best remembered for being the 53rd Super Bowl in the history of the NFL and not much else.

Of course, it didn’t necessarily have to be that way. In another timeline, it was the Saints who took on the Patriots in a legendary matchup (and where, if you’re a big believer of the butterfly effect. they actually played the entire song from Spongebob during the halftime show).

Unfortunately, we’ll never know what would have happened if New Orleans had made it to the big game thanks in no small part to the No-Call Heard Around the World.

The defender, Nickell Robey-Coleman, admitted he was waiting for a flag to be thrown and was even fined for the hit but the Saints and their fans had little recourse despite their best attempts.

Roger Goodell theoretically had the power to overturn the results of the game but ultimately neglected to do so. Instead, he decided to remain virtually silent in the ensuing days and got put on blast for suggesting otherwise.

Goodell has dodged questions about the no-call as successfully as Spider danced away from the bullets in Goodfellas but he did eventually admit the officials were at fault, and according to Yahoo Sports, he’s gone as far as reaching out to the governor of Louisiana to make things right.

Saints fans didn’t take too kindly to the blown call but Goodell is doing what he can to mend ties with a letter that was posted on the governor’s website in which he pledged to make things right.

He explained his side of the story and says the NFL is doing what it can to avoid having to deal with another fiasco in the future:

Our rules do not permit the Commissioner to overturn the result of a game because of an officiating error, and I believe it would be wrong for me to do so.

I agree that it is incumbent on us to review this issue closely to determine if there are changes in our rules or procedures that would prevent a similar occurrence in the future.”

I’m sure this will make Saints totally forget about everything.