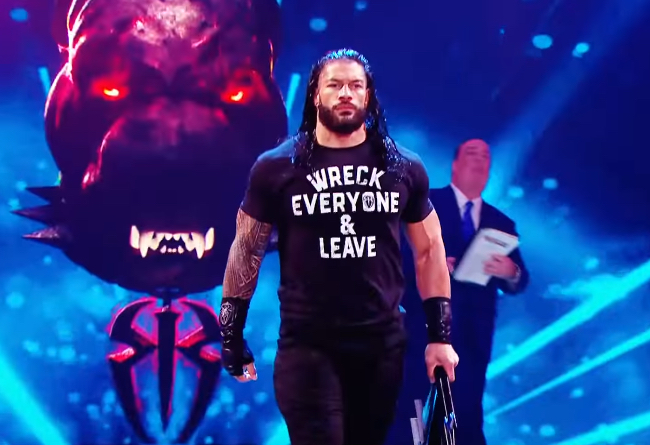 This past Sunday, Roman Reigns walked away from WWE Payback as the new WWE Universal Champion.

Technically, he never lost the title. Reigns had to relinquish the championship after his leukemia returned and then took five months off due to COVID-19 concerns and being immunocompromised.

Reigns returned to the WWE the previous week, at Summerslam, showing up after the main event and laying out both “The Fiend” Bray Wyatt and Braun Strowman after Wyatt regained the Universal Championship.

Reigns, back only a week, found himself once again in the main event of a PPV and eventually the Universal Champion.

This fact didn’t sit well with some fans, especially the contingent who feel the WWE has pushed Reigns to the top for far too long.

“Roman being forced down people’s throats again,” wrote WWE fan Ed Morgan on Twitter, “such an overrated perfromer. The belt has changed hands has so many times it just has no prestige. Rubbish.”

And, OF COURSE, he spelled a word wrong.

Only reason I’m down your throat, is because you keep your mouth open. I’m the best performer of this generation period and the title is finally in the right hands for it to hold true value. https://t.co/E7PzVUP20D

Morgan responded to being lit up by the new Universal Champion but wisely did not tweet at him again.

Funny how all the people against my comment of Roman Reigns being shoved down throats are Reigns marks. For the record, I do not debate he is a hard worker and I am pleased he beat leukemia.

“For the record, I was a dick, and got called out for being a dick, but I want to say I’m not a dick and I’m happy for Roman.”

Hopefully, this new heel Reigns sticks around and doubles down on opinionated wrestling fans.