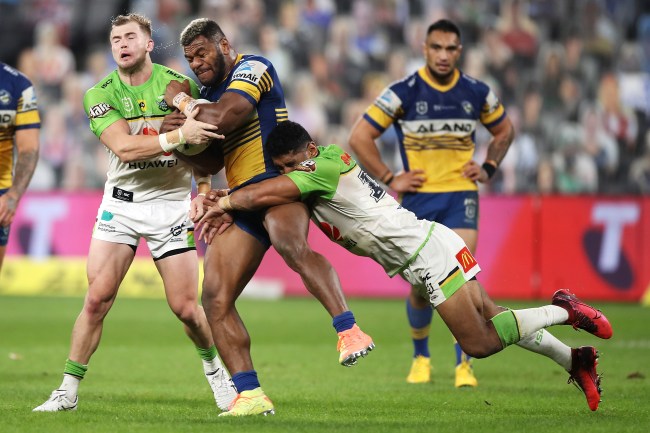 Iosia ‘Sia’ Soliola is a professional Rugby player from New Zealand who currently plays for the Canberra Raiders in Australia’s top-flight National Rugby League (NRL). He’s now been sidelined after a brutal collision caused fractures in his face that were so bad it took TWENTY SCREWS to put his face back together.

The X-Rays of his face and the before/after photos show just how brutal of an injury this was but you don’t really need a ton of explainer when we’re talking about TWENTY SCREWS needed to put a face back together, do you?

Here’s the initial injury from July 3rd which caused the fracture. You can see it’s a face-to-face hit, one that immediately sent him to the hospital.

Sia Soliola off to hospital with a suspected facial fracture after collision below. Greatest concern for cheekbone/eye socket fracture, if confirmed usually at least 3-4 weeks on the sideline to allow for adequate bone healing #NRLRaidersDragons pic.twitter.com/5SUTDJrUac

He was unable to eat solid foods and had to eat everything after blending it and drinking his food through a straw. He’s now given an update on his Instagram after undergoing surgery to fix the fractures. Scroll through the X-Rays on his Instagram to see the extent of the damage. Here’s the before:

And here’s the after:

That is a LOT of hardware in his face. The dude is well on his way to becoming Wolverine at this point, pumped full of futuristic metal making him a borderline superhero.

The good news is the surgery was successful and he’s expected to make a full recovery after a 3 to 4 month rehabilitation process.

For more on this injury and surgery, you can read this article from the Australian news.