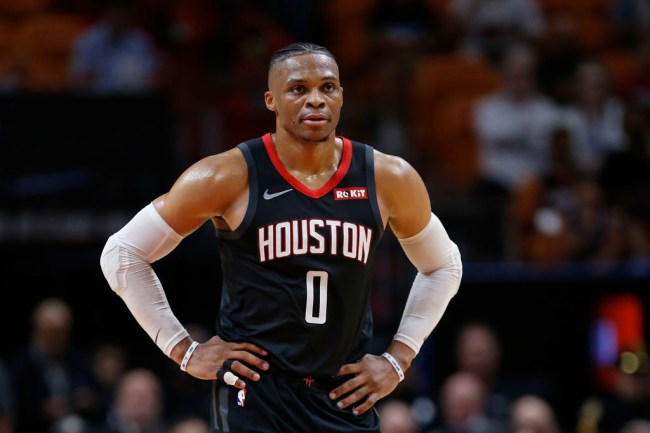 Athletes in every sport are subjected to a fair amount of heckling but no one has to deal with more insults getting lobbed their way than guys in the NBA thanks to seating arrangements that allow fans to be more on top of the action than any other sport.

Players in the league are already subjected to a fair amount of trash-talk courtesy of their opponents but most of them have also spent years honing their insult game and are able to dish out verbal abuse just as well as they can take it.

As a result, there are plenty of guys who won’t think twice about firing back if they’re chirped by someone in the crowd, which is what Draymond Green did when he put a fan in his place in front of his date (although his diss had nothing on the one LeBron dished out a few years ago).

However, there are some people who occasionally overdo it, including a Jazz fan who went from trolling Russell Westbrook on Twitter to throwing some particularly unsavory taunts his way at a game before finding himself in a confrontation with the point guard and on the receiving end of a lifetime ban (which he recently decided to counter with a $100 million lawsuit).

Westbrook has a long history of run-ins with spectators, and while he managed to restrain himself after getting memorably flipped off, he was unable to stop himself from firing back during another confrontation.

Of course, there are some lines that shouldn’t be crossed when it comes to trying to get under someone’s skin, and on Sunday, a video emerged of a Pelicans fan at a game last month who didn’t even come close to going too far when he took aim at Westbrook.

However, the innocuous jabs apparently didn’t sit too well with the Rocket, as he successfully got security to escort the heckler out of the arena.

Fan yells "you're a joke" towards Russell Westbrook, gets thrown out of the arena. Guess the joke was on him 😂 #NBA #NBATwitter pic.twitter.com/7Fb4VpYkuv

The video doesn’t tell the entire story but a woman who was far too proud of being a snitch provided some more details to shed some light on just how sensitive Westbrook is.

An idiot told him his cheekbones went to the back of his head, he’s the most inefficient player ever and his career is a joke. Russ calmly sent his bodyguard to tell the security guard but they picked the wrong guy so my loud ass pointed out the ignorant heckler and he was gone!

I think it’s safe to say this isn’t the best look.