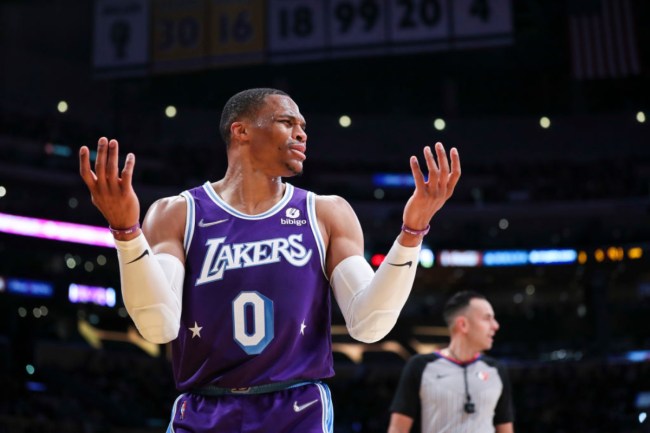 Just when it looked like the Los Angeles Lakers may have found their stride with a four-game winning streak as the calendar flipped to 2022, they’re now losers of four of their last five games.

It’s no secret that things haven’t exactly been steady in Los Angeles, the team’s record of 22-23 very clearly paints that picture, but it now seems that this team has reached its boiling point.

Head coach Frank Vogel is reportedly on the hot seat and with those rumors and reports flying around, he decided to bench Russell Westbrook late in the game against the Pacers earlier this week.

Westbrook has been downright bad in 2022 shooting just 32% from the field while averaging 13.8 points per game. He’s also someone who carries a $44 million salary, so it goes without saying that he didn’t exactly take the benching all that well.

He skipped out on his media responsibilities following the Lakers’ loss to Indiana but has since spoken about being shown the pine.

Russell Westbrook’s Reaction To Being Benched

“Surprised, yes. I was disappointed I didn’t go back in, but I’m more disappointed that we lost the damn game,” Westbrook said, according to ESPN’s Adrian Wojnarowski.

“I want to be able to be on the floor to help my teammates and be able to help our team win in games like that — but that was a decision that was made.”

While his comments about being benched are pretty tame, he wasn’t exactly calm when the whole situation actually went down.

According to Kyle Goon of the OC Register, Westbrook nearly left the game entirely after being benched and did plenty of talking.

“The 33-year-old point guard nearly left the floor after he was subbed out for Malik Monk, but teammate DeAndre Jordan shepherded him back.

Westbrook watched the next few minutes unfold, apparently jawing from the bench with his jersey untucked, although exactly what was said (and at whom) is still unclear.”

It’ll be interesting to see how all of this unfolds over the next handful of games for the Lakers. They take on the Magic in Orlando Friday night in what will be the first game back since the latest drama.