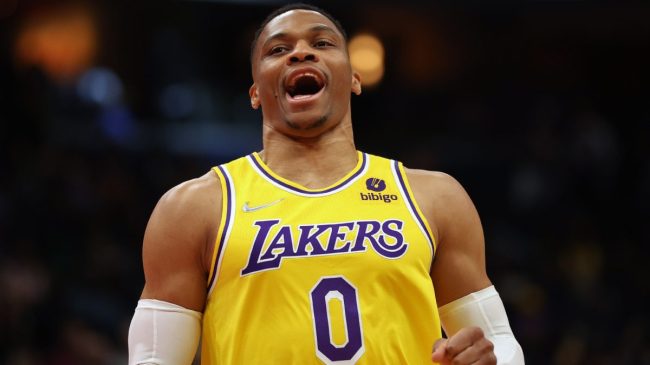 A Russell Westbrook trade could be imminent based on his play in Los Angeles last season. The Lakers struggled through a losing season where they were expected to compete for an NBA title.

After finishing 33-49 and missing the playoffs completely, it’s evident that there need to be some changes in Los Angeles.

One of those changes has already taken place with head coach Frank Vogel being fired after the season. That coaching search is still in the works, but the team looks to have zeroed in on a few candidates.

Talks have also surrounded the possible dealing of a number of stars on the roster. It seems that no one is safe, not even LeBron James. Still, it seems that a more likely trade option would be either Anthony Davis or Russell Westbrook.

Unfortunately, there is still some hesitation from both the Lakers and possible trade suitors.

With Davis, his injury history has teams weary. It also seems that the Lakers still like his productivity when on the court. If he can stay healthy, the team might not be ready to part ways. I mean, they did just win an NBA title with Davis and LeBron in 2020.

But Westbrook seems like an easier piece to let go. He’s only been on the team for one season, an unproductive one at that. He could still help another team, but he’s clearly not playing at a level that would have suitors jumping at his $47 million price tag.

With those contract concerns, teams interested in Westbrook want a little something extra to sweeten the pot.

In order to take over Russell Westbrook’s massive contract, especially given his subpar play last year, teams want the Lakers to throw in a first-round draft pick to make the offer more attractive.

It’s certainly a lot to give if you’re Los Angeles, but it would also clear some room from the books to allow the organization to add some young talent. Los Angeles just has to decide if it’s worth the asking price.

The Lakers gave up a first-round pick (and more) to land Westbrook. The team doesn’t seem eager to give up another draft selection to unload the former star.

Lakers not willing to give up draft picks

According to a report from The Athletic, the Lakers don’t appear willing to give up a first-round pick in order to get rid of Russell Westbrook.

As we mentioned before, they gave up a lot to land the point guard, and they may not be ready to admit failure. Trading away draft selections just to unload their struggling star would certainly do that.

Unfortunately, due to that huge $47 million payday that Westbrook is expecting, getting a deal done without sweetening the pot is nearly impossible. Teams are no longer willing to pay top dollar based on Westbrook’s 2021 production.

With the Lakers currently not budging on the trade demands, it’s looking more likely that the point guard will be back in LA next year.