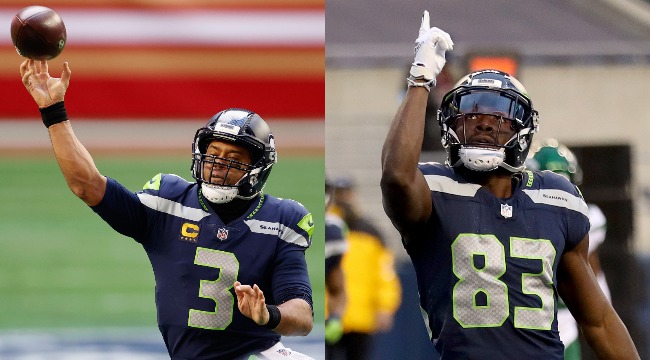 Close your eyes and think of the co-workers you deal with on a daily basis. If less than half of them would take on a little risk to secure you a BIG reward, update your LinkedIn and dream up a couple resume lies, because you my friend, need a new gig.

Mr. Unlimited put this selflessness on full display in the waning moments of the Seahawks 26-23 win over the Niners, choosing to throw a pop pass to David Moore instead of kneeling out the clock in an effort to secure a contract incentive that stipulates Moore gets $100,000 for 35 receptions on the season.

This otherwise meaningless pass pushed Moore over the edge, finishing the regular season with 35 catches, 417 yards, and six touchdowns.

Despite Seahawk coaches calling a kneel down to run out the clock yesterday, Russell Wilson changed the play in the huddle — throwing a pop pass to WR David Moore instead.

This $100k haul is far more impactful for the 25-year-old Moore than it is for say, Antonio Brown. Moore signed a one-year deal with the Seahawks worth a relatively thrifty $825,0000. In his four-year NFL career, Moore has earned $2.2 million in salary, which isn’t anywhere near private jet money.

After the game, Russ confirmed that idea to pass was to get Moore his cheddar.

Russell Wilson confirms last catch to David Moore got him a $100,000 incentive. pic.twitter.com/hIZK4GfUk5

“We called that play because David gets $100,000 if he makes that catch so it’s a blessing to be able to help his family and his daughter. So we wanted to give him that catch so we were able to dial that up for him the last play.”

If six-figures is on the line for me, I’m negotiating with cornerbacks to lay off for a play to get a 20% cut. I’m sure I’m not the only one.

Have a beer, Mr. Moore. You’ve earned it.

Maybe spring for a craft lager next time.