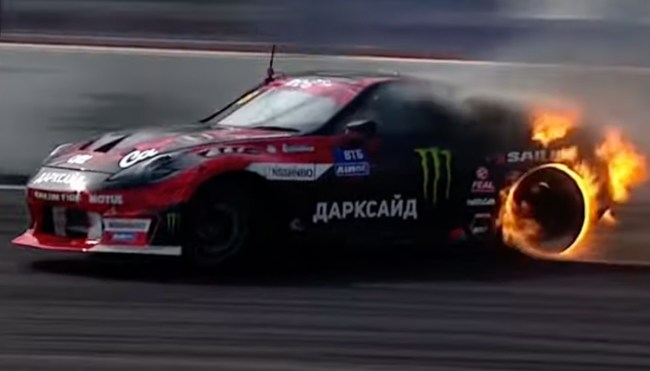 The vast majority of my knowledge concerning the art of drifting a car is derived from video games and the third movie in The Fast and the Furious franchise. With that said, “impressed” would be a huge understatement when it comes to describing how I feel about the skills possessed by the legendary Ken Block and other drivers capable of pulling off wild stunts with insane precision (especially when you consider I still get nervous merging onto the highway).

It takes a special kind of person to skid around a course while controlling thousands of pounds of metal at uncomfortably high speeds, and if you need any proof the people who willingly do that on a regular basis aren’t built like the rest of us, you don’t need to look any further than a wild video that recently surfaced out of Russia.

Earlier this month, the Russian Drift Series descended upon Sochi for an event that produced one of the craziest racing runs I’ve ever witnessed courtesy of the absolutely fearless Arkady Tsaregorodtsev.

During his initial qualifying lap, Tsaregorodtsev encountered a slight issue less than 30 seconds into his tour around the track after the back of the Nissan 370Z he was piloting suddenly burst into flames. However, he not only refused to let that setback stop him from finishing the run but hopped back into the singed vehicle for another attempt before it crapped out shortly after leaving the starting line.

If you don’t happen to be fluent in Russian, here’s the English commentary that documented what went down (the first run starts around the 2:30 mark of the video).

That right there is the definition of a guy being a dude.