Ryan Leaf Says Seeing Dwayne Haskins Is Like Looking In The Mirror, So, Yeah, Happy Days For The Washington Football Team 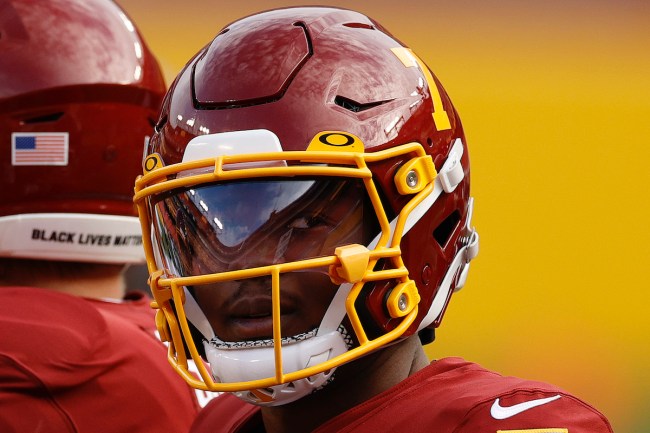 Ryan Leaf is, arguably, the biggest bust in NFL history, as the former San Diego/Los Angeles Chargers quarterback completely flamed out during his short stint in the league. It didn’t get much better for Leaf after football either, with the dude falling into a dark hole and even spending some time in jail before pulling himself out and getting his life back together.

While things seem to be good for Leaf nowadays — as he recently chatted about with our own Matt Keohan on BroBible’s “Endless Hustle” podcast — he’s aware of his past and doesn’t shy away from talking about it. So when images recently surfaced of Dwayne Haskins partying with strippers following his Washington Football Team’s loss to the Seattle Seahawks in Week 15, Ryan Leaf could relate.

Taking to Twitter, Leaf didn’t shy away from bashing Haskins, not only calling the second-year quarterback’s actions “utter ignorance,” but also saying he sees a lot of his young self in the Washington Football Team’s signal-caller. Take a look below at Leaf’s tweet from Tuesday.

Listen, this is exactly what you think it is. Utter ignorance. There’s something about the brain chemistry of an elite athlete that has everything & feels slighted & hurt. You have zero impulse control, no one will tell me what I cannot do. I swear it’s like looking in a mirror! https://t.co/xsNdT1Ae7k

Imagine being the Washington Football Team — which used the No. 15 overall pick in the 2019 NFL Draft to select Dwayne Haskins to be their future quarterback — and hearing an NFL bust like Ryan Leaf say that. It has to be disheartening. It has to be a “holy hell” kind of moment. It has to be a wake up call for both the organization and franchise to try and straighten things out and hit the accelerator on the maturity button.

Some of the photos of Haskins that circulated yesterday, including the tweet from @DCBarno, who appeared to notice it first pic.twitter.com/Kl3TZ2sVzD

The Washington Football Team reportedly knows all about the images of Haskins maskless with the strippers. Who knows if that means they’ll address them with him or not, and, even if so, if he’ll take ownership and want to make changes to his personal life. On and off the field, the quarterback seems lost.

But to avoid becoming an NFL bust himself, it might be time for Dwayne Haskins to hear Ryan Leaf’s opinion and look hard and long at himself in the mirror and want to make a change. The dude’s still only 23 years old, so to think he could be out of the NFL before his 25th birthday is insane. It’s on him to learn from the mistakes of others from the past to use as fuel to be better now. Time will tell to see if Haskins has the ability to do that or not.