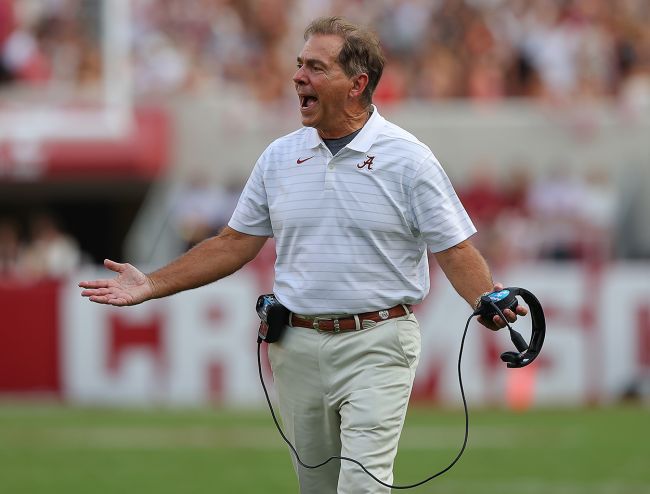 Name, Image and Likeness has changed the landscape of college football. There is no denying that the market is inflated and there is more conversation being had in the public eye.

However, it’s not like players weren’t paid before NIL.

Texas A&M head coach Jimbo Fisher has said players were paid illegally prior to NIL. Ed Orgeron has discussed the wild things he tried to do to land top recruits like Adrian Peterson and told a story about a rival hiding a recruit in the back of a church to keep him away. Tennessee was busted for giving recruits McDonald’s bags full of cash. SMU got the ‘death penalty’ for financially compensating The Pony Express. Ole Miss got popped by the NCAA for their recruiting violations during the Hugh Freeze era.

It has always happened. Players have always been paid illegally— at least over the last four+ decades.

That’s why Nick Saban’s extremely spicy, targeted rant on NIL came with such a strong stench of hypocrisy. He claimed that Texas A&M “bought” every single one of its Class of 2022 recruits, and said that Alabama did not buy a single player.

Whether that is true or not, it’s hard to imagine a world in which the Crimson Tide has never been involved with compensating its athletes.

To compete in the current and former landscape of college football recruiting, there was and is a financial element. Now it is done through NIL.

The ‘Bag Man’ booster has had a hand (and bank account) in recruiting for as long as most of us have been alive, which is why Saban’s rant doesn’t quite add up. And now former college football players are calling him out for what they perceive to be lies.

Former Florida State defensive end Travis Johnson went on to be drafted in the first round of the 2005 NFL Draft by Houston. Prior to his collegiate and NFL career, Johnson was a five-star recruit in the Class of 2000 and the No. 4 overall recruit in the nation.

He responded to Saban’s claim that Alabama did not buy one player on Wednesday night. In turn, Johnson said that the Crimson Tide offered him six figures during his recruitment and brought up the recruitment of Albert Means.

Means was a former five-star defensive tackle in the same class as Johnson whose recruitment involved illegal financial compensation. He and his coaches were offered a large sum of money in exchange for his commitment and Alabama ultimately got caught by the FBI. It even led, whether directly or indirectly, to the death of a convicted booster.

Hahahhaha @mikerodak y’all been paying for players since the 80s offered me 6 figures in 99/00 and gave Albert Means and his coaches 6 figures during that time and now y’all swear y’all not paying anyone? Like the kids say, CAP! Y’all was NIL before NIL. https://t.co/wAlRtMMr0m

Johnson was not the only one to call Saban out for his rant on Wednesday night. Leon O’Neal Jr., who is currently a rookie in the NFL after signing as an undrafted free agent with the 49ers, also spoke out.

O’Neal was a four-star recruit in the Class of 2018 and chose Texas A&M over Alabama. He said that every Crimson Tide football player received a Dodge Charger upon their commitment while he was driving a Nissan Maxima.

Every player there had a scatpack hell cat before NIL I was in a Nissan Maxima lol it had a sun roof though 😂 https://t.co/dXocibXYYu

If Saban is sitting on his high horse and speaking down about NIL being used to entice recruits into a commitment. Perhaps he should look internally first?