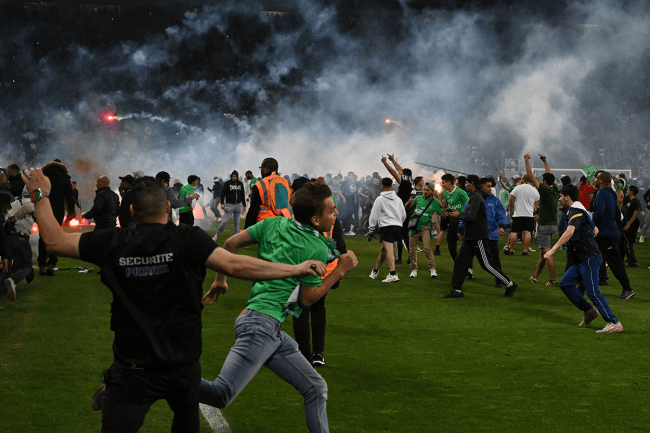 The stakes of Sunday’s Ligue 1 match between AS Saint-Étienne and AJ Auxerre were as high as they come. The winner stayed up and the loser was relegated.

It was the former on the losing end and the proceeding scenes were insane.

Saint-Étienne lost the match 5-4 on penalty kicks in their home stadium. As a result, the club was relegated from the top French league to Ligue 2 for the first time in 21 years.

When the final whistle blew, Saint-Étienne supporters flooded over the fence and onto the pitch. It was utter mayhem. Fans threw trash and lit flares onto the turf and at their own club’s players as they were evacuated into the tunnel after the loss.

Both sides had to be quickly escorted to the locker room amid safety concerns while an extremely dangerous scene unfolded. Ultimately, 33 people suffered minor injuries, with 14 police, 17 spectators and two Auxerre players hurt.

Saint Etienne are relegated to Ligue 2… This is carnage. pic.twitter.com/qIwpvJ6zOT

The sheer amount of smoke that billowed throughout the stadium was insane.

France. 29.05.2022
Chaos at the stadium after Saint-Etienne has been relegated from Ligue 1 for the first time in 20 years after Auxerre won the play-offs. Furious home fans stormed the pitch. View from the Auxerre fan section. pic.twitter.com/dq4JMvK72s

“Despite an exceptional and reinforced system of close to 500 agents, many supporters invaded the pitch at the final whistle of the match against AJ Auxerre,” St Étienne said in a statement.

“Some were then guilty of several degradations and acts of violence towards the players of the game, security agents, the police and the Tribune Pierre-Faurand.

“The ASSE [St Étienne] strongly condemns these actions and gives its full support to those affected and will initiate the necessary legal proceedings.”

However, even after the match, the madness continued. Irate Saint-Étienne supporters even targeted home players’ cars.

Saint-Étienne was once the darlings of the French league. The club won eight of 10 league titles and six Coupe de France crowns in a 12-year period in the 1960s and 1970s. They have fallen on hard times in recent years and Sunday was the culmination.