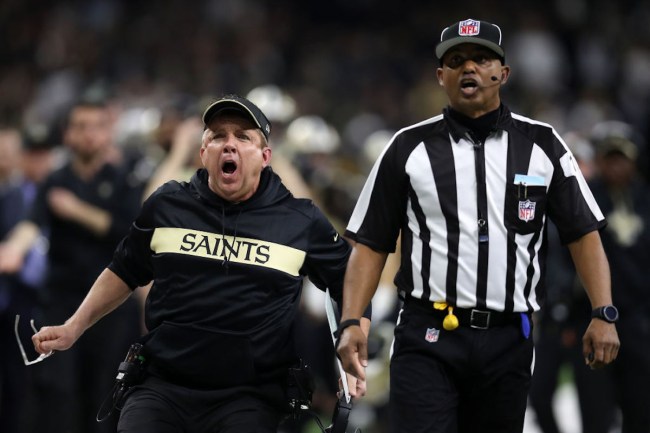 During the final minutes of this year’s NFC Championship, it looked like the New Orleans Saints were on track to punch their ticket to the Super Bowl but suffered a bit of a setback after no flag was thrown following the most blatant pass interference infractions in the history of pass interference.

However, no flag was thrown on the play, and thanks to the no-call heard around the world, the Rams would eventually come from behind to win the game and help treat us to what may have been the most boring Super Bowl in the history of Super Bowls.

Saints fans reacted to the loss in a variety of ways ranging from punching television sets, coming up with insane conspiracy theories, trying to sue the NFL, and signing fruitless petitions in an attempt to get Roger Goodell to exercise his right to overturn the result of the game.

Plenty of Saints supporters decided to boycott Super Bowl LIII by partying in the streets of New Orleans instead of tuning in (which turned out to be a fantastic decision on their part), but according to NOLA.com, they might finally have something worth watching now that a movie is being made based on the infamous incident:

According to a news release from [Prior Military Productions], “The Hangover” actor Ed Helms is in talks to play the lead role, with Danny DeVito in line to portray “a Cajun sheriff.”

Producers also hope to coax NFL Commissioner Roger Goodell—who was pilloried by fans and the media for his delayed response to the no-call—into making a cameo appearance in the film. They’re also planning to pepper the film with appearances by former and current NFL players.

I personally have no idea how someone could manage to make a movie based on a single call like this one, but if it means I get to see Danny DeVito play a Cajun sheriff, I am very, very on board.