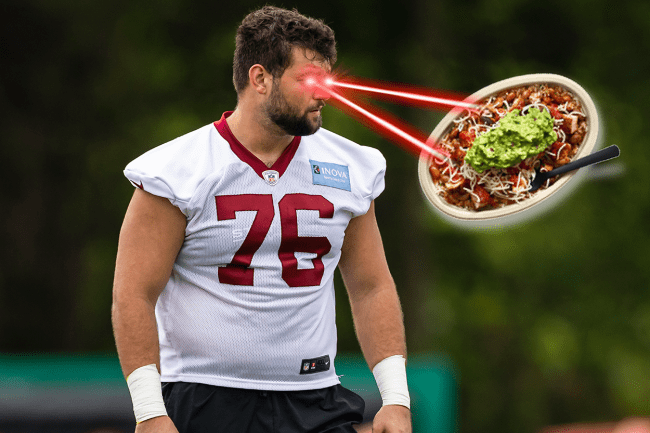 When it comes to being an offensive lineman in the NFL, it requires a very specific diet. Not only are the big uglies eating a lot of calories, but every single one of those calories must follow a very specific plan that has been catered to their height, their target weight and their BMI.

At the forefront of the diet is strength and speed, of course. To accomplish that goal, linemen eat a lot of good carbs and protein.

For Washington Football Team tackle Sam Cosmi, the easiest way to reach his numbers is by eating a lot of one, very specific thing. In fact, the company with whom he dines frequently should probably offer him a sponsorship deal.

According to Cosmi, who was asked about his diet during a media session earlier this week, he eats Chipotle every single night, sometimes more than once in a day. His obsession might not reach that of Falcons fullback Keith Smith, but Cosmi is crushing Chipotle — double meat — seven nights a week.

And this is not a new thing.

When Cosmi arrived on campus at Texas as a three-star recruit in 2017, he stood 6-foot-5, 295 pounds. Now he is listed almost 15 pounds heavier.

A big part of that can be attributed to Chipotle.

Instead of throwing him to the wolves as an undersized freshman (yes, 295 is undersized at his position), the Longhorns staff chose to redshirt him and help him forge a new physique.

“I sat down with my head strength coach, Yancy McKnight, and our nutritionist,” Cosmi said to Texas Sports Nation. “Made a plan of, ‘Hey I don’t want to be a fat guy on the field. I want to be able to move, want to be able to do things.’ We knew that process was going to be slow but we knew it was going to pay off. Majority of the time was just constantly working hard in the weight room, tons of protein shakes.”

Outside of the weight room and team facilities is where Chipotle came into the mix.

“And for me, being a college student, I felt like Chipotle was my go-to because it was $7.85 for a bowl. For us, that’s super cheap. On the weekends, I’d eat Chipotle breakfast, lunch and dinner.”

A big part of Cosmi’s obsession might stem from his former Texas teammate Derek Kerstetter, who once called Chipotle “the best restaurant in Austin.”

Although Cosmi did not share his order this week, Kerstetter once shared that he got a chicken bowl with red salsa, lettuce and double rice, claiming that the extra rice is “huge.”

“It makes the bowl bigger and it ties the meat and everything together,” he said.

No matter who or how Cosmi got into Chipotle, we know now that he too is hooked. The rookie tackle is putting it back every. single. night.

In addition to his love of Chipotle, he loves some ice cream. But not just any ice cream, protein ice cream. And he wants to make that very clear:

God bless the Big Uglies up front. Football literally cannot be played without them and their incredible diets.