Mel Kiper Jr. Gets Trashed On Twitter For Claiming Sam Darnold Would Be Second-Best QB In 2021 NFL Draft 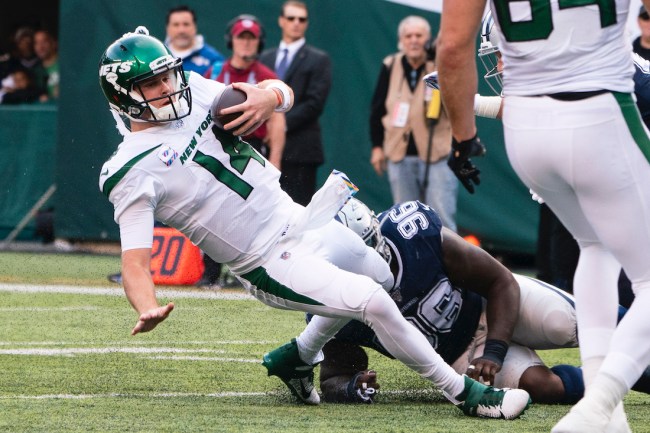 Look, I’m not trying to add to the criticism of Sam Darnold’s brief NFL career, mainly because I’m not in the business of kicking a man when he’s down. But make no mistake about it: The No. 3 overall pick in the 2018 NFL Draft has had a miserable first three years in the league, having a touchdown-interception ratio of 45-39, while having a win-loss record of 13-25 as a starter. That’s not exactly franchise quarterback kind of stuff.

Like, I get it, the New York Jets haven’t exactly surrounded Sam Darnold with a bunch of talent, but he still looks lost out there, and he’s supposed to be the leader of the offense. Being caught during a nationally televised game saying he was “seeing ghosts” out there on the field obviously doesn’t help his cause.

But because the media falls in love with the potential talent of athletes all the time — particularly quarterbacks who have the pedigree that Sam Darnold does — the Jets’ signal-caller typically gets more love than he deserves. Case in point? draft guru Mel Kiper Jr., who appeared on Get Up Wednesday morning to talk about the upcoming NFL Draft.

When asked blatantly about where Darnold would hypothetically rank compared to this year’s crop of top quarterback prospects, Mel Kiper Jr. didn’t mince words, and said that he’d put the current Jets starter as the second-best player at the coveted position in this class, behind only presumptive top pick Trevor Lawrence. Take a look below — and witness the shock on the faces of the other analysts.

"There's a quarterback out there [that's available] that's better than any of the QBs in this draft, except for Trevor Lawrence— and that's Sam Darnold."

I totally understand Mel Kiper Jr.’s commitment to Sam Darnold as a young quarterback, but, sheesh, to publicly claim that the New York Jets’ signal-caller would be a better prospect than guys like Justin Fields, Trey Lance, Mac Jones and Zach Wilson — the top-rated quarterbacks in the 2021 NFL Draft — is asinine. The fact that the conversation is even being had proves that Darnold isn’t an elite prospect. I mean, you don’t see the Get Up crew having the same conversation about other 2018 quarterback draftees like Baker Mayfield, Josh Allen or Lamar Jackson. It’s actually proof that Darnold is… not great.

But Mel Kiper Jr. didn’t just stop there, because the dude took things even further by saying the Seattle Seahawks should consider trading disgruntled star Russell Wilson for Darnold. This only shocked everyone even more, particularly those on Twitter, who couldn’t help but share some interesting reactions after hearing the hot take form Kiper.

Just look at their faces once Mel Kiper threw that out there. pic.twitter.com/koUnj5oiPp

How does this man get paid to talk about football? This is INSANE

so the worst starting qb in football since 2018 is better than any other 1st round qb this year? That literally makes no sense and is an embarrassing take.

Bro, wtf?!?! Hell no. This might be the worst take of all time. Hell no. pic.twitter.com/xpOilRv0n8

How he can just dismiss what we've seen for the past 3 years just because he had a high grade on him coming out is beyond stupid.

Sure, there have been bad takes from people before, but hearing Mel Kiper Jr. say Sam Darnold would hypothetically be the second-best quarterback in the upcoming NFL Draft is up there on the list of the worst. The eye test rarely lies, and, from what we’ve all witnessed for the past three seasons, the New York Jets don’t have a franchise signal-caller on their roster at the moment.

Who knows if Darnold can turn his career around or not, but, with the Jets holding the No. 2 overall pick in the upcoming NFL Draft, he may be competing with one of the aforementioned top prospects to even see the field next season. That’s not exactly the way Gang Green envisioned things after spending (wasting?) the No. 3 pick on the former USC standout just three years ago.