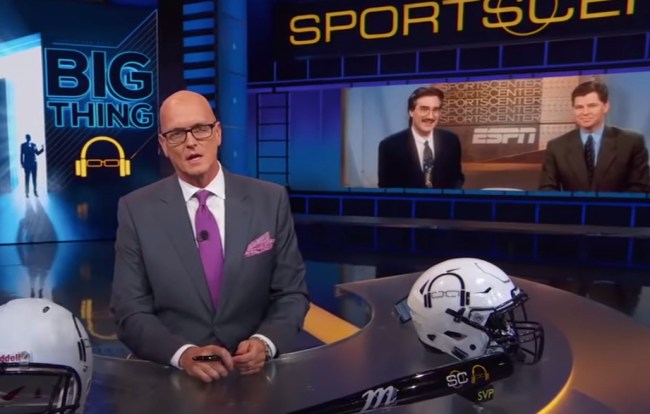 Scott Van Pelt has always been one of the real ones. The longtime SportsCenter host and ESPN personality knows how to connect to people, whether that’s fans, viewers watching on TV or his colleagues in the sports media industry, with SVP always speaking his mind and telling things like it is. Van Pelt doesn’t seem to get caught up in the finger pointing that often goes on in the industry, which is why he’s so revered.

One of Scott Van Pelt’s most honest segments is his “One Big Thing,” which he does during every SportsCenter with Scott Van Pelt. He often talks about trending topics, offers his opinions on cool or inspiring stories, or delivers A+ facts about something that’s hotly debated. It’s a cool moment to see Van Pelt just talk, almost slamming down the gavel and having the final say on whatever it is he’s talking about that day.

In Thursday’s “One Big Thing” segment, Scott Van Pelt offered up some inspiring words to another longtime OG in the sports media business, Dan Patrick, who, earlier in the day, had opened up about health issues he’s been battling, with the 62-year-old revealing that he’s suffering from Polymyalgia Rheumatica, an inflammatory disorder that causes muscle pain and stiffness in the joints.

Talking for three minutes during his segment Scott Van Pelt praised Dan Patrick, speaking about having him on his first episode of SportsCenter with Scott Van Pelt, while boasting about Patrick’s time both at ESPN and beyond. Take a look at the full message below.

Such an awesome move by Scott Van Pelt, lending supportive words and sending love to a man in Dan Patrick who he knows well. This is what it’s all about, guys, so good to see SVP use his public platform to show how real he is, while bringing light to Patrick’s condition. Here’s to Patrick overcoming all he has going on.