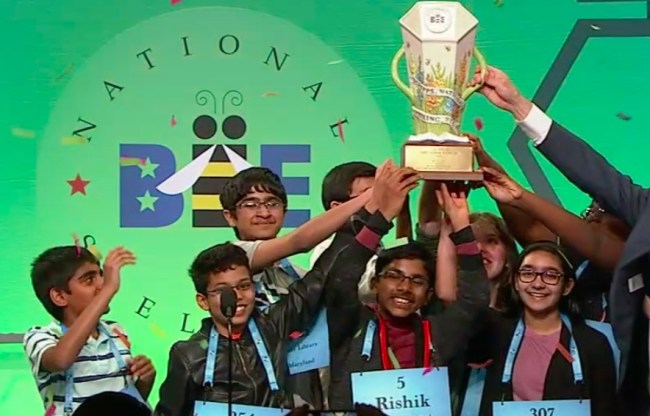 Last night was the annual Scripps National Spelling Bee, and while it’s always entertaining to watch seven-year-olds spell “Stakhanovite”—knowing full well I misspell “receive” 50% of the time—this year’s Bee was an outrage.

In total, eight winners were crowned last night after moderators called the tournament in the 20th round. This marks the first time in history that more than two co-champions split the top spot.

The judges ended the tournament because they were “running out of challenging words.” Are you kidding me?!  First of all, this is the third year in a row that the spelling bee had more than one winner. What kind of major competition ends in a tie year after year after year? Secondly, there are upwards of 200,000 words in the English language. Run through all of them if you must, I want to see tears.

We only watch the spelling bee to see the look of crushing defeat in the children’s eyes and profound disappointment in those of their parents. I can’t do that if you give me an eight-way tie.

To be sure, this isn’t on the kids—they did their jobs. In the last five rounds, these red-hot contestants spelled 47 straight words correctly. At one point the judges’ words looked like a drunk text to your ex after four or five small-batch bourbons.

I’m not saying the solution is to break child labor laws and keep the children spelling until the sun comes up, but it certainly would make for good entertainment. By 2 AM, a mental breakdown or two is guaranteed. Maybe we could toss in a midnight speed round to weed out the feeble-minded while we’re at it.

The next craziest misstep of the evening was scheduling the Bee during the NBA Finals. Our correspondent, Cass Anderson, rightfully shirks the blame to Adam Silver and his tone-deaf scheduling abilities.

Never understood why the @nba is foolish enough to schedule their #NBAFinals2019 against the #SpellingBee. You go against the GOAT of summer TV you’re gonna lose pic.twitter.com/JudEUvxYKU

Still, even while fighting for airtime with the Golden State Warriors, these kids managed to eclipse Drake’s performance last night.

Drake looking at twitter realizing that everyone’s talking about the #spellingbee and not him pic.twitter.com/elQKq18TT1

If he spells this correctly I’m chugging my drink #SpellingBee pic.twitter.com/dw0FNcXlpw

For shame, Scripps. For shame.