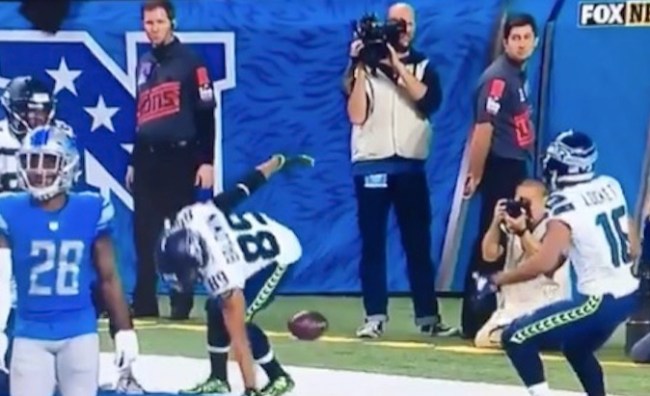 If you were to draft up a short list of the most epic baseball fights in history you’d undoubtedly have a few of these fights on there: Pete Rose v. Bud Harrelson (1973), Pedro Martinez v. Don Zimmer (2003), Armando Benitez v. Tino Martinez (1998), and Nolan Ryan vs. Robin Ventura (1993). Earlier today the Seahawks recreated this epic Ryan-Ventura fight in a TD celebration (below).

In that fight, Nolan Ryan hit Robin Ventura with a pitch. Ventura then charged the mound where Nolan put him in a headlock and started throwing punches, straight up POUNDING Ventura in the face.

For a long time, everyone thought Nolan beat the sh*t out of Ventura but this closer look at the fight shows that Ventura wiggled his way out of the headlock and started throwing punches before taking Nolan Ryan down to the ground. You can see a closer look at that here but the TD celebration is down below:

For some reason, even though football is the significantly more violent sport baseball tends to have better fights. After the Seahawks got in the endzone for a touchdown, Tyler Lockett, Doug Baldwin Jr., and Jeron Brown recreated the epic charging-the-mound fight as the best TD celebration fo 2018 so far.

This fan was quick to point out that it’s missing the headlock, which it is.

I wonder if they assumed that including the headlock would’ve led everyone around to think they were serious and not just playing around.

Best TD celebration of 2018 so far? You’re damn right it was.

Seahawks may have taken the lead with the best TD celebration this year pic.twitter.com/FmMOhgR0kx

Big creativity points for the touchdown celebration!
Is this the best you’ve ever seen?
Props to @TDLockett12 @DougBaldwinJr @jaronbrown13!#Seahawks rolling in Detroit! pic.twitter.com/UEn9GioIHu

The celebration: Tyler hits a batter and is rushed at the mound. Well done.

Even Detroit fans had to respect this celebration.

Everyone on Twitter seemed to chime in on this one to pay respect.