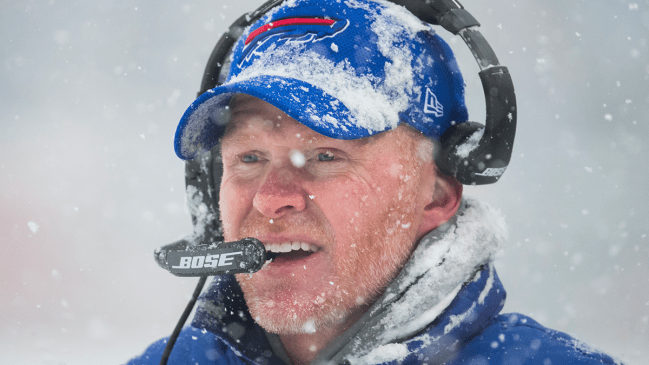 If preseason hype was all it takes to win a Super Bowl, then the Buffalo Bills would’ve cruised to this year’s title. Unfortunately for the Bills, though, that’s why they play the games.

Heading into the season as the betting favorites to win this year’s Super Bowl, the Bills’ season came to a screeching halt in snowy Buffalo on Sunday as they got dominated by the Cincinnati Bengals by a score of 27-10.

The loss didn’t just knock the Bills out of the playoffs, but it raised questions about the team itself, as the NFL world is now left wondering what more they need to get over the hump. The one person that Bills fans certainly hope has the answers is head coach Sean McDermott, who sent a harsh message to the organization during his year-end press conference.

“Unfortunately, we didn’t we didn’t play a very good game yesterday and a good team beat us,” McDermott said. “But again, it offers a look into or a lens that we can look through and say hey, these are some of the areas we have to get better at in order for us to win.”

“It starts and ends at the line of scrimmage, and so we’ve got to look at that,” McDermott acknowledged. “And then you look at the quarterback play, and I thought, we’ve got a quarterback that we feel really good about and should feel good about. But we all, myself included, Josh (Allen) and the leaders of this football team, we all have to improve in certain areas to move this organization forward.” [via Buffalo Bills official website]

In the game against the Bengals, Allen — who was specifically name-checked by McDermott in his comments — completed 25 of 42 passes for 265 yards, no touchdowns, and one interception. Allen’s struggles on the day also led to an ugly moment from wide receiver Stefon Diggs, who went full diva-mode by accosting Allen while on the sideline.