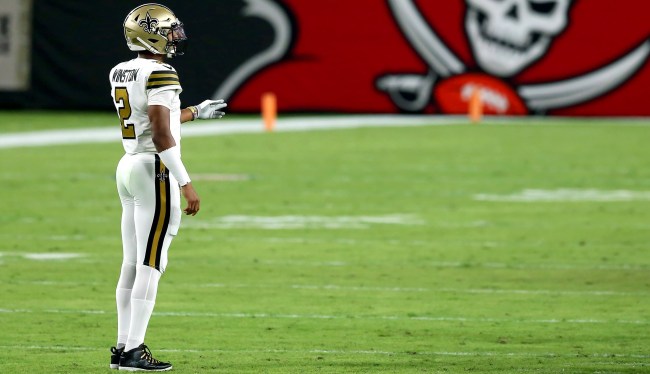 When the New Orleans Saints signed Jameis Winston, a 26-year-old quarterback coming off a year in which he led the entire NFL in pass attempts (626) and passing yards (5,109 or 319.3 per game), many assumed he would be automatically slotted into the backup role for 41-year-old Drew Brees.

However, Winston also led the entire NFL in 2019 in another key statistic, interceptions (30), which may or may not have something to do with him being slotted behind Taysom Hill – a man who had thrown a grand total of 13 passes in his NFL career coming into this season.

Back in April, Winston admitted that he had difficulty reading street signs and license plates prior to getting Lasik surgery, and was saying all of the right things, pointing out that being in the quarterback room with Brees and Hill is “like a Harvard education in quarterback school.”

Thus far, unfortunately for him, that education hasn’t had a chance to show many dividends as Winston has only played in three games and thrown 11 passes.

So what does the future hold for the 2013 Heisman Trophy winner?

When asked if Winston is a starting quarterback in the NFL, Payton responded, “Jameis is definitely a starter. He’s performed exceptionally well considering the amount of time we’ve had, or haven’t had, since we’ve signed him.”

Are the Saints looking to keep Winston when his one-year, $1.1 million contract with New Orleans runs out? And if so, will he get a chance to compete for the starting quarterback job if Drew Brees retires?

“He’s going to have that opportunity the minute Drew leaves,” replied Payton.

Some Saints fans wish that opportunity, with Brees currently on the shelf with multiple injuries, was now.

After Sunday’s loss, Payton was a little more critical of his pet project Hill.

“I thought he played all right,” said Payton. “I’m watching the tape, he’s still slow on a few decisions. He’s to the wrong side of the field a few times relative to making decisions. And I don’t like the fact that the ball was out again.”

Hill has now fumbled 10 times, losing five of them this season.

“There’s some things that he’s gotta clean up,” Payton added.

As for whether or not Brees will be returning to the field in Week 15 against the Kansas City Chiefs, Payton wasn’t sure.

“I don’t know. I haven’t talked to the docs yet,” said Payton. “This would be a goal week for him, realistically. And yet I know last week he was still having significant pain.”

A list of QBs that have a higher completion percentage than Taysom Hill this season:

Brees, during his weekly Sunday night interview with Cox Sports Television, admitted “all I can say is I’m close.”

Listen to Payton’s entire segment on Huddle & Flow below…