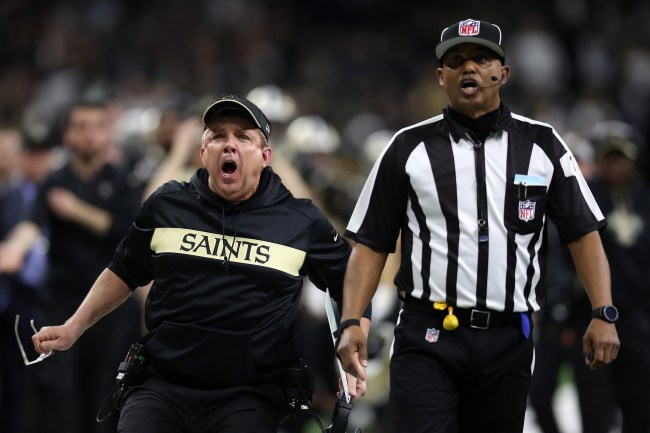 Sean Payton is challenging the NFL to make some rules changes following the absolute debacle that happened during the NFC Championship Game this past season. Payton, whose New Orleans Saints were on the wrong end of the most obvious pass interference call in the history of football, said that, in order for the league to not be “comfortable with what happened a year ago,” the NFL needs to consider some serious adjustments to how things are currently run.

Talking to the NFL Network, Sean Payton gave some serious ideas to help make the league’s officiating better. Here’s some of what the Saints’ head coach had to say, per Pro Football Talk:

“There are a handful of things that we’ve got to be better at right now,” Payton said on NFL Network, via Mike Triplett of ESPN. “Our best at playing and our best at coaching are spending 20 hours, 18 hours a day. Our best at officiating, it’s their second job. That has to change, because it’s too hard. There’s too much at stake for someone who’s a teacher at a school, who’s a florist, an attorney. That’s backward thinking.

“And really as we move forward into the next 10 years, for instance, of our game, where do we want officiating? With all of the technology we have available to us, our fans are closer to the game, our fans are way more in tuned and educated as to the correct calls in the game. And we just need to be better.”

When asked about those who insist the Saints got “robbed” when officials failed to throw a flag on Rams cornerback Nickell Robey-Coleman on his hit on Tommylee Lewis late in the NFC Championship Game, Payton said, “Put me in that number.”

“But the idea that we’re discussing it today and that we’re having this impactful discussion today would get back to that group that says, ‘Hey, people don’t want to [tune] into a car race with no bumps or crashes. People don’t want it to be finely-tuned,” Payton said. “Hey, I understand that line of thinking. But we’ve got to get that corrected, I think, though. The big errors like that, especially in 2019.”

This is the most outspoken Sean Payton has been since the devastating NFC Championship Game loss, which left the entire city of New Orleans boycotting the Super Bowl after the blown call. Payton’s right in saying that having the league avoid any changes would be like an admission that it is comfortable with missed calls happening on big stages.

As a member of the NFL’s Competition Committee, Sean Payton does have some influence on others in terms of correcting things, but we’ll have to wait and see if that leads to anything. There are a number of NFL rules that the league’s discussing, so some changes may be coming in the next few years. Payton, who admitted that the NFC Championship Game loss was like a break-up and resulted in eating ice cream and binge-watching shows and movies, hopes that some of the league’s updates mean more attention to how the game’s officiated, and he’s right in offering up some possible solutions.