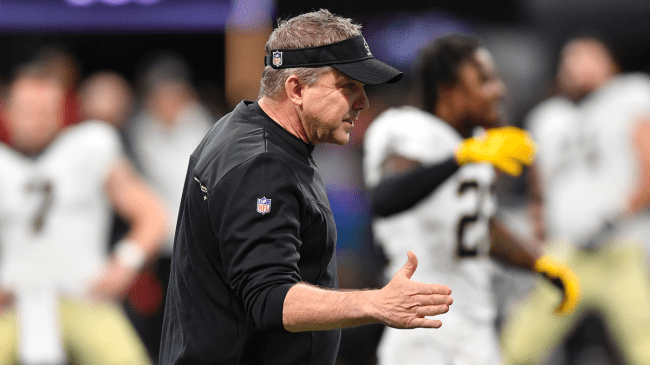 Sean Payton has only been away from coaching for eight months after leading the Saints to a 9-8 record in 2021. The head coach spent 16 seasons in New Orleans, taking the franchise to a Super Bowl title in 2009.

He is widely considered one of the best offensive minds in pro football, but he opted to walk away from the game following the conclusion of last year.

Now, it seems he’s already itching to get back on the sidelines.

Payton was on a podcast with NewOrleans.Football and said he’d be open to a return to coaching in the “right situation.”

In retirement, Payton has been working as an NFL analyst for FOX Sports, but it seems that watching the Saints’ most recent game against the Bucs had him feeling a bit wistful about his time in the league.

“This past weekend’s game vs. Tampa was the first time I had a version of FOMO. I was jealous of everyone that was there, including random Bruce Arians on the sideline.”

While Payton may want to get back into coaching within the next year, there’s one small contract detail that could make teams hesitant.

Payton is still under contract with the Saints

While he retired following the 2021 campaign, Payton is under contract with New Orleans for the next couple of seasons. In 2019, the head coach signed an extension with the franchise that runs through 2024.

With that being said, anyone who hires the head coach prior to that date would have to give up a great deal of capital for the retired leader.

“If another franchise does hire Payton, they would have to compensate the Saints since he’s under contract through 2024. The cost could be as high as a first- or second-round draft pick.”

That could deter NFL teams from taking the leap, at least until that contract finally runs out.

Those contract details haven’t stopped fans and media from speculating on Payton’s next team. The head coach has been linked to the Panthers, an NFC South rival of his former team.

Carolina looks to be near the end of the Matt Rhule experiment with the coach posting a 10-25 record over his first 35 games. After watching Payton on the opposing sidelines for nearly two decades, it appears Panthers’ fans would take him in an instant.

Never thought I’d say this but David Tepper needs to throw the biggest bag at Sean Payton to be the #Panthers next head coach pic.twitter.com/4IEluJr0i2

Payton has also been linked to the Cowboys due to his relationship with owner Jerry Jones. Many have gone as far as to say he’s the “coach-in-waiting” for Dallas, though he’s done nothing to suggest that talks have occurred.

Cowboys and Chargers bidding war for who gets to send a bag for Sean Payton next year, gonna be beautiful

A few other teams have joked about adding Payton to the coaching staff following slow starts to the 2022 season, including the Broncos and Colts.

Broncos HC Sean Payton is going to be fun next year.

“Hey Sean Payton, this is Jim with the Colts” pic.twitter.com/ZJVj5aT9yz

It will be interesting to see if Sean Payton does decide to return to the NFL. If he truly is ready for another coaching stint, a number of teams will certainly be interested.