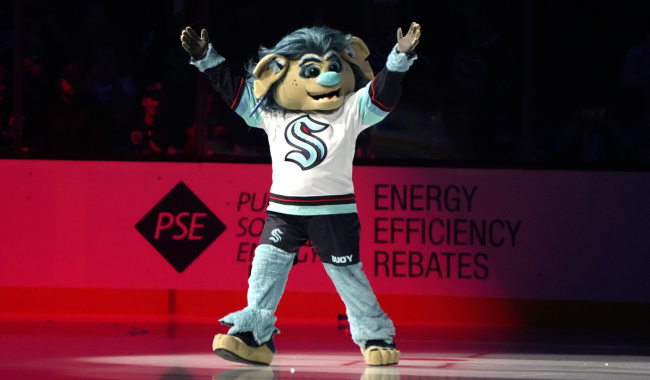 Last year, the new NHL expansion franchise, the Seattle Kraken, finally took the ice almost three years after being approved by the league.

Their inaugural season ended with the Kraken in last place in the Pacific Division with a 27–49–6 record.

So, in an effort to keep fans’ interest while attending home games at Climate Pledge Arena, the Seattle Kraken introduced a new mascot during the team’s preseason game against the Canucks on October 1st.

The new Kraken mascot is a sea troll named Buoy.

That’s right. The Kraken’s mascot is a troll – supposedly the “nephew” of the Fremont Troll. (The Fremont Troll is a public sculpture in the Fremont neighborhood of Seattle which was erected to deter the presence of homeless people and antisocial behavior under the bridge. Perfect for a hockey mascot, right?)

Instead of a terrifying 18th century sea monster, Seattle’s NHL team, the Kraken, has a troll, complete with an anchor earring, as a mascot.

The Kraken are going to have some tremendous synergy when the third film in the Trolls movie franchise comes out in November of 2023.

Last year, the Seattle Kraken had a “team dog” named Davy Jones, so… yeah… if this is at all confusing to you, you are far from alone.

Hate to say it, but you guys whiffed on the mascot. I don't know why you didn't got with a Davey Jones-esc type mascot. I know it's for kids, but you missed an empty netter on this one pic.twitter.com/8HYWA85oFc

“I immediately thought *this is easily gonna be the worst mascot in the league* and after going to the comments, glad to see everyone agrees,” one fan commented on Twitter.

“Hey guys! Let’s base our mascot on a homeless repellent troll that’s under one of our bridges!!!” another fan wrote.

Buoy???? You had ALL the sea creature options in the world and you pick a TROLL????

“I couldn’t possibly hate this mascot any more,” another fan commented.

Fire whoever thought of this, 2022 edition