New Jersey Devils Run Awesome Promotion With ‘Seinfeld”s Facepainter, Who Then Totally Bit It On The Ice 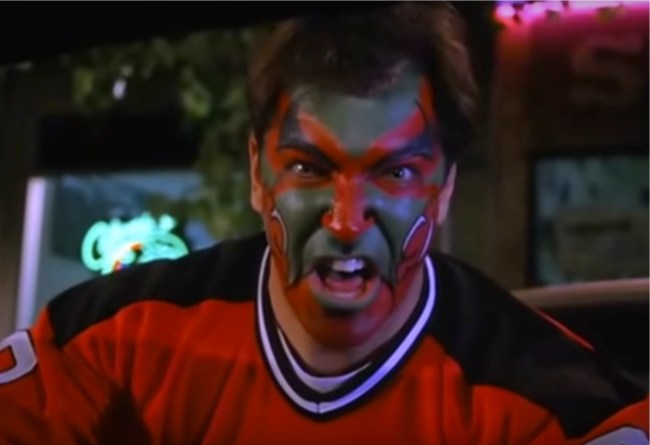 Seinfeld‘s one of the best shows TV has ever given us. In fact, it’s so good that I still find myself staying up and watching two episodes on the f*cking CW every single night, even though I’ve seen any episode that’s ever been released. What can I say, Jerry, Kramer, George and Elaine still have my kind of humor.

While some millennials are being noobs and think Seinfeld is too offensive with some of its jokes from 20 years ago, I’m not one of them. So, rather than watch some reality show that sucks, I’d rather watch reruns of a comedy show about absolutely nothing.

And, while there were tons of Seinfeld episodes that were memorable, one of the most famous ones was “The Facepainter,” which included actor Patrick Warburton as Elaine’s boyfriend, David Puddy, painting his face like a maniac for New Jersey Devils games. It’s an all-time classic, and one of those episodes that most of us know about. Here’s a quick reminder of Puddy in full makeup.

While Seinfeld has been off the air for 20 years now, that didn’t stop the actual New Jersey Devils from paying homage to Warburton’s character yesterday, not only running a promotion for fans by giving away Puddy bobblehead dolls, but letting the actor drop the puck prior to the game — while reenacting his facepainter character. It all seemed so smooth and fun, then, holy sh*t, ol’ dude bit it hard when he was walking on the ice by the Devils’ bench. Take a look at the hilarity.

Puddy faceplanted on the Devils bench and I'm dying 🤣 pic.twitter.com/zjqmKPUYtY

Big tree fall hard, huh? The dude didn’t seem to let it get him down, though, and that’s what’s always important after making an embarrassing moment very public.

As for the aforementioned bobbleheads, here’s a look at how awesome those Puddy figurines looked, with the first 9,000 fans into the arena last night taking one home.

And, even cooler than the entire promotion, bringing Puddy to the arena even raised $25,000 for charity by making the appearance, so, minus the hardcore fall from the actor, one would have to say it was quite the successful event. Wonder if the Yankees plan on bringing George to the stadium this year for some promotion to keep this Seinfeld love going. Is that too much to ask?