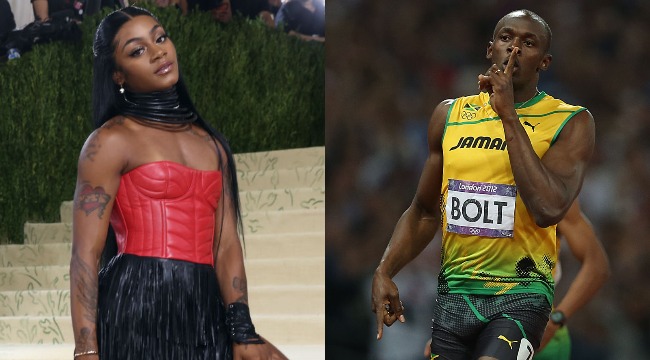 Sha’Carri Richardson’s handling of her Olympic ban was as graceful as humanly possible.

Her accountability and humility in the face of devastating news earned her the universal respect, with Joe Rogan going as far to call the Olympic Committee “disgusting.”

In the wake of the ban, the 21-year-old LSU product was offered a truckload of endorsement opportunities, namely the vape pen company Dr. Dapper offering her $250,000 to test their products.

But, Richardson has done everything in her power to dilute her inspirational image: mocking Jamaican sprinters, finishing dead last at the Prefontaine Classic, and disrespecting the most decorated Olympic track athlete this great nation has ever known in Allyson Felix.

In an interview with The Post last week, eight-time Olympic gold medal holder Usain Bolt opened up about Richardson’s place within the sport and culture at large.

“I would tell Sha’Carri to train harder and to be focused and not say too much … If you talk that big talk, you have to back it up.

“So just train hard and focus on that,” he continued, “and try to come back do it, and then talk about it.”

“Jamaicans were vexed because she was talking a lot of s–t before the actual race, it is just one of those things,” he said. “Jamaicans don’t like when people talk s–t about us because we are a very proud people. So if you talk about us we are gonna want you to back it up. It definitely gave those women the extra push [to win.]”

Richardson did not take the GOAT’s criticism too kindly, sharing an IG story in response to a screenshot that reads:

“Good ‘humbling’ Morning to y’all…everybody want to give advice in the media but none of them actually take the time to speak to her outside the media. So I feel her. Stop speaking on me when you don’t even speak to me.” [via]

This will either add fuel to Richardson’s sprinting fire or serve as another distraction. Time will tell.