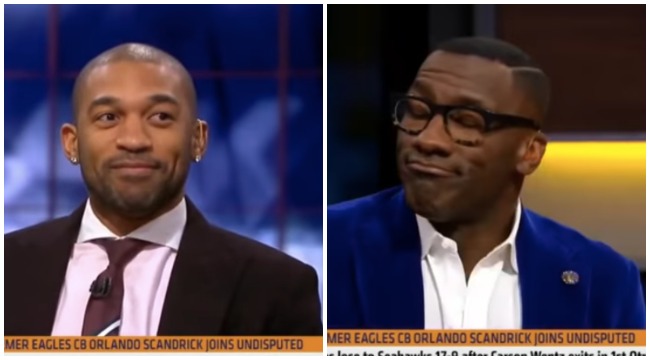 It’s been a tough end of the decade for Orlando Scandrick. The veteran cornerback was cut by the Philadelphia Eagles after week 7 in the wake of back-to-back blowout losses, a move that prompted the 32-year-old to go scorched earth on his former teammates.

The beginning of this decade isn’t looking much sunnier for Orlando. Draya, his supremely attractive former lover and baby momma, was spotted having a romantic dinner with New York Giants wide receiver Corey Coleman mere days ago.

If you’re wondering if these events were humbling for the former fifth round pick, don’t be silly. After the Eagles lost to the Seahawks in the Wild Card, Scandrick decided to dance on his former team’s grave.

Scandrick made a guest appearance on Undisputed Monday, which essentially amounted to an ambush by Shannon Sharpe.

Sharpe straight up reminded Orlando that he’s in a suit now because he wasn’t good enough to keep playing, despite his trolling and team-bashing.

A partial transcript, via Crossing Broad:

Shannon Sharpe: You sitting here talking with me.

Sharpe: Against the Cowboys!

Sharpe: Bro, you here with me.

To Scandrick’s credit, Shannon’s claim that he gave up a 3rd and 22, at least in the game against the Cowboys, isn’t true.

It is true that Twitter doesn’t care about the facts, it cares about the burn.

Orlando Scandrick “they been giving up 3rd & 15 all year”

Orlando scandrick when shay sharpe told him he gave up 3rd and 30 pic.twitter.com/spMG6kBqpg

Orlando Scandrick after being yelled at by Shannon Sharpe pic.twitter.com/DFMVrUfgK6

Shannon hitting Scandrick with the, “you sitting here talking to me b/c you gave up 3rd & 22” pic.twitter.com/FJ5IQk6CGe

Someone at Undisputed needs to leak the off-camera interaction between these two.