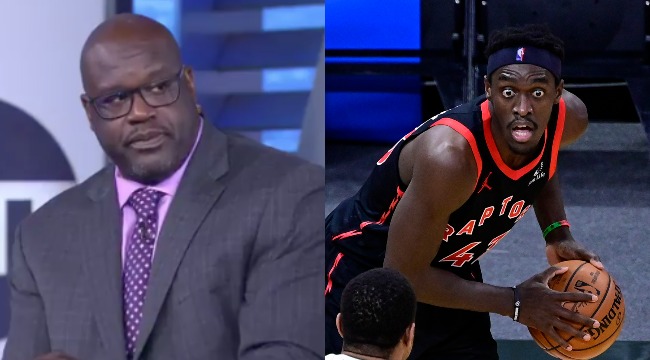 Pascal Siakam is arguably the most unheralded All-Star / NBA champion in recent memory. A prototypical lunch pale guy, dude just shows up to the stadium, drops 20 on 45 percent shooting and then disappears like a fart in the wind. Hell, there hasn’t even been a leaked visual of his penis on Snapchat, which is becoming a rite of passage for many young stars.

The NBA’s 2019 Most Improved Player seems like he’d be a favorite amongst the NBA on TNT crew for his work-first mentality, but that does not seem to be the case. At least with, what’s his face, Shack.

EJ: "You got your eyes on Pascal?"

Shaq: "Nah, I got my eyes on Siakam." 🤔 pic.twitter.com/1ZXTSGPWMg

Is there another player in recent NBA history averaging 20+ ppg who an average fan who hadn’t just woken up from a six-year coma couldn’t name? Hell, I’m just three letters away from spelling *checks Google* Antetokoumpo correctly.

Keep in mind, we’re just a few weeks removed from both Kevin Durant and LeBron James criticizing Shaq for their consistent hating on younger stars (ie Shaq telling Donovan Mitchell to his face he doesn’t have what it takes to get to the next level).

The internet, for all its perpetual bickering, banded together to fight Pascal’s fight.

my favorite part of this is that it means shaq has just accepted there’s a player in this game named pascal who he has not noticed at all https://t.co/SxACsnWMZR

Ernie: Shaq, you ready to talk about Pascal?

Pascal Siakam was just an All-Star and a really important player in the Finals recently, maybe lets know his first name Shaq…

Shaq is a fool. He didn’t know Siakam’s first name was Pascal & when teased about it he said these guys aren’t good enough for me to know his name, as if he wasn’t a key piece on a championship team two seasons ago 🤡

This is why the NBA is the pettiest league in professional sports and this is why I will never stop watching.