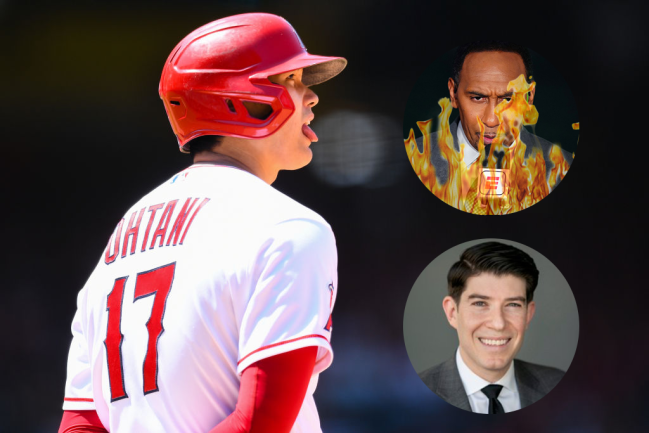 It is hard to undermine the greatness that is Shohei Ohtani, but somehow, some way, Stephen A. Smith managed to do so and his coworker did not agree with the take. Just before the MLB All-Star break, Smith said on his show that he has a hard time seeing Ohtani as the face of baseball because he needs an interpreter.

On Tuesday, Passan was back at it and publicly flamed Smith on Twitter after Ohtani signed an exclusive memorabilia deal.

History on the field.

Ohtani is the league leader with 34 home runs and also has a 3.21 ERA in 73 innings pitched. The two-way superstar was the first All-Star to bat leadoff and start in the Midsummer Classic and he couldn’t have had more fun doing it.

At only 27 years old, Ohtani is doing things that have literally never been done before and remains humble throughout. After pitching a scoreless six innings on Monday, he immediately went out and played in the outfield.

Ohtani is off the mound and into right field🤘#WeBelieve | @Angels pic.twitter.com/SqSXftZcVP

Despite his shutout on the mound, the Angels lost. Ohtani took some of the blame because he “only” went 1-4.

Shohei Ohtani (amazingly) said he was partially to blame for the team's loss tonight.

"I'm part of the fault for that, too. Because I'm in the lineup for most of my starts. And today, I was only able to get one hit."

Is this not the man you want as the face of baseball? Fanatics certainly does.

History in the merch market.

The global merchandise brand announced a multiyear partnership with Ohtani on Tuesday. Fanatics will be the exclusive distributor of his autographs, collectables and memorabilia. Ohtani will sign bats, jerseys, photos and game-used items in both English and Japanese.

This deal comes after the Oshu, Japan-native accounted for 28 percent of all All-Star Game sales and became the top-selling athlete across all sports on Fanatics. Passan, who already rocked Smith on his own show, took the announcement as another opportunity to mock his ESPN colleague.

sHoHeI OhTaNi cAn't bE ThE FaCe oF BaSeBaLl: https://t.co/xLgMUgwOYB pic.twitter.com/eWzOIfCiHK

Reactions were mixed as to whether Passan should continue to pile on Smith, but I think it’s pretty clear— Smith’s take was so egregious that it will live forever in the Hall of Fame for bad takes and should be mocked for eternity.