Soccer In Nashville Is A Beer-Drinking, Drum-Banging Party That You Need To Experience 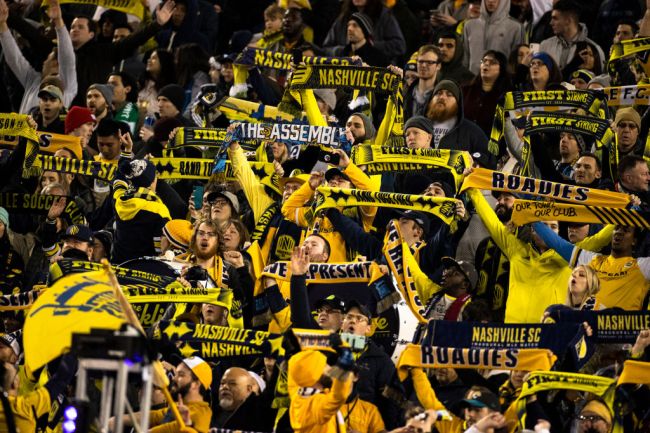 Soccer and Nashville may seem like an unconventional marriage because it is. But unconventional is cool and the fútbol experience in Music City is a lot of fun.

Nashville SC is in its second season competing on the MLS level after making a surprising run to the conference semifinals in its first season last year. The club’s origin story began as a pipe dream just seven years ago and it has come a long way toward building a passionate fanbase in a city that leans heavily toward the Tennessee Titans and college sports.

I attended Nashville SC’s most recent home game and had an absolute blast. Here is how it went:

This whole thing started when Nashville’s long-running (minor league) professional team, the Metros, folded in 2012. From there, a banker by the name of Chris Jones formed Nashville FC with hopes of having a fan-owned club. The team competed in the fourth tier of American professional soccer for three years before the USL (second tier) awarded a franchise to a separate ownership group in Nashville. Jones sold the rights in 2016 and in 2017, the city and the club (known by then as Nashville SC) submitted a formal bid to the MLS. That bid was granted later that year.

Nashville SC began its inaugural season on the MLS level in 2020 and the club’s home opener was one of the last sporting events I attended before the world shut down due to COVID-19. I had a great time despite the cold February weather and was looking forward to getting back to a game after things warmed up a bit. I had that chance on Saturday.

Construction is underway on a brand new stadium for the club so for now its sharing Nissan Stadium with the Titans. However, your game day should not begin there. Like any good sporting event, you should start at a tailgate or a bar. Tailgating is not allowed right now, so I ventured out to the latter. The team’s most passionate fans, known as The Roadies, threw a pregame at a taphouse called BoomBozz. I only include the name because it was a really awesome spot that was fairly close to the stadium with great pizza (coming from a New Englander, that says a lot) and all kinds of beers.

Nashville SC partnered with a local brewery to make club-inspired beers, and the ‘Pitch Invasion Lager’ was $2 up until kickoff. Four beers and a 10″ artisan pizza later and my tab was no more than $20 to head off to the game with a full stomach and a slight buzz. Pretty good.

After catching a ride to the stadium and passing through security, it was about time for another beer. The price tag at a professional sporting event will always hurt, but tallboys help to lessen the blow a little bit. With a pair of cold snacks in hand, I wandered into the stands and picked pretty much anywhere that I wanted to sit.

I spent the first half around midfield and Nashville went down 2-0, but The Roadies were in full voice and the beer went down just fine. After wandering back to the concession stands at halftime, I stumbled into the team store and bought one of my new favorite hats. Oh and I met the team’s mascot. He did not want a beer.

Both teams took the pitch for the second 45 and I decided to join the Roadies in their festivities behind the net. Everybody was extremely welcoming of a fairly drunk idiot jumping around along with them and I quickly caught on to the team’s chants. Much like a football sideline, the leaders held up play cards to let us know what chant to sing. One had a picture of Dale Earnhardt Jr. and the other had a picture of Morgan Freeman in the movie ‘Glory.’ I could not tell you which one meant what, but that’s okay. I sang along once those who knew what they were doing got started.

My presence within The Roadies section was the difference maker and Nashville SC scored two goals in the second half to finish the game in a draw. It was the second game in a row that they came back from 2-0 to draw, which is better than two losses. We’ll take it.

All in all, the entire experience felt much like that of a Premier League game on a significantly smaller scale. The club and its fanbase do everything right. It will be fun to see the club grow over the next few years as it (hopefully) continues its success and moves into a tighter, better-suited stadium. Glory to Music City.