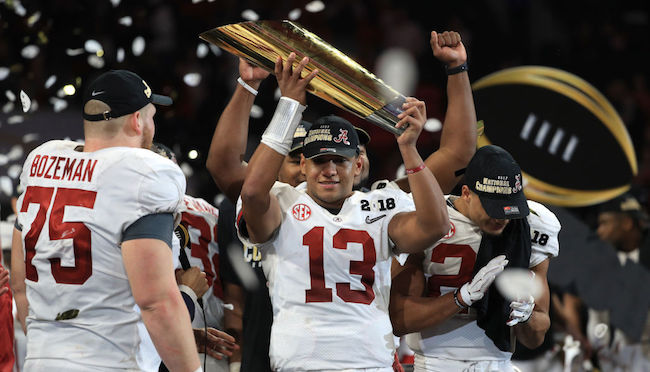 Last night, Alabama backup quarterback and true freshman Tua Tagovailoa ensured he’ll never have to buy himself a drink in Tuscaloosa when he led the Crimson Tide to a national championship after replacing Jalen Hurts in the second half of last night’s National Championship game. Considering he’s only 19 years old, he’ll technically have to wait until next year to take advantage of his status as a campus legend, but it will probably be worth the wait.

Hurts had a fairly underwhelming first half when it came to the passing game, but I assume almost everyone watching last night’s contest was surprised when Nick Saban decided to hand over the reins to a QB who had never really played a meaningful snap in his brief college career. However, Tagovailoa did what he could to make Saban look like a coaching genius when he threw a game-winning touchdown in overtime after leading Alabama back from a 13-point deficit.

Tagovailoa’s incredible performance was given the credit it deserved after he was named the game’s Offensive MVP, an achievement that no one could have predicted before kickoff— except for one person.

After the game, Twitter user Mike Denevi started racking up the retweets thanks to the following prophetic prediction that was posted to his account before the game:

There are a few possible explanations for this sorcery. There have been similar incidents in the past where people have tweeted out basically every possible outcome before deleting the ones that failed to come true immediately in order to paint themselves as a savant.

However, there’s also a chance that Denevi followed in the footsteps of Biff in Back to the Future II and traveled through time to acquire a sports almanac with the explicit intent of scoring himself a brief moment of internet fame (as opposed to making millions of dollars).

This isn’t even the first time this week a football fan made a seemingly insane prediction that eventually came true. On Saturday, a Tennessee Titans fan guessed Marcus Mariotta would throw a touchdown pass to himself because wizards have apparently recently developed an interest in sports.

Meanwhile, I’m still holding out hope that LeBron James will eventually block an opponent’s shot off the backboard so hard it lands in the hoop at the other end of the court. If these two predictions can come true, I don’t see a reason why mine can’t.